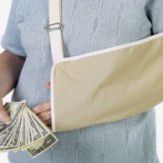 The United States Supreme Court on Tuesday ruled that a man who was seriously injured in a car accident in 2007 is entitled to keep some of the money that his employer, US Airways Inc., was trying to take back as part of a reimbursement for his medical bills that resulted from the car accident.

US Airways employee James McCutchen of East Liverpool, Ohio, suffered serious personal injury in a multiple vehicle accident in January 2007 that left him with several life-threatening injuries that required emergency surgery and extensive rehabilitation. He eventually had a complete hip replacement and has undergone several additional surgeries since the crash and still suffers from chronic pain that cannot be relieved by medication.

Before the car accident occurred, McCutchen had entered into a health benefit plan (the “Plan”) which was administered and financed by his employer (US Airways Inc.). After the accident, the Plan paid a total of $66,866 to cover medical expenses that were incurred from the accident. McCutchen also filed a lawsuit against the young driver who caused the accident, but because that driver was underinsured and there were multiple deaths and serious injuries involved McCutchen only received a $10,000 settlement from the driver’s insurance company.

Thankfully for McCutchen, his insurance policy provided underinsured motorist coverage of up to $100,000, which he recovered from his own insurance company. In the end, McCutchen obtained a $110,000 net recovery, 40 percent of which was used to pay his lawyers for the contingency fee and other legal expenses, leaving him with approximately $66,000 from the original settlement.

US Airways Battles for Reimbursement

You might remember that, earlier in the article, we mentioned that the Plan paid a total of $66,866 to cover McCutchen’s medical costs following the accident and leading up to the settlement. Well, after McCutchen received his settlement, they wanted to be reimbursed in full for the money they paid to cover his medical expenses. McCutchen’s attorneys placed $41,500 in a trust account to reimburse US Airways Inc. – under the assumption that attorneys fees were deductible from the reimbursement amount. US Airways, however, did not agree with that and filed a lawsuit demanding the $41,500 in addition to the remaining $25,366 from McCutchen.

While the court agreed that US Airways had every right to be reimbursed for the money it provided to McCutchen for his medical bills, it also determined that the company is responsible for sharing in the legal costs of obtaining the third party settlement. In other words, McCutchen’s recovery of the settlement came at a cost to himself, while US Airways did not absorb any of that cost. Therefore, US Airways was found to be responsible for accounting for a pro rata portion of the attorneys fees and costs.

Furthermore, the court determined that awarding US Airways the entire amount of the remaining compensation would unjustly enrich the company while McCutchen would actually be left with a small remaining debt to pay to the company. That scenario would not constitute “appropriate equitable relief” as described in the Employee Retirement Income Security Act (ERISA).