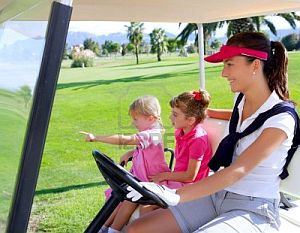 A study conducted by researchers at Georgia Health Sciences University shows that with the increasing popularity of golf carts have as a mode of transportation over the past decade or so, significant head injuries requiring medical attention have also increased substantially.

Researchers at the university identified a total of 68 people who were treated for injuries resulting from a golf cart accident between 2000 and 2009. More than two-thirds of those injury victims had suffered head injuries determined significant enough to require medical attention – meaning the injuries involved loss of consciousness, hemorrhage or skull fractures.

Interestingly enough, nearly two-thirds of all head injury victims were children around the age of nine years old. This statistic alone really illustrates the potential for significant injury to children when a golf cart accident occurs on the golf course and in residential neighborhoods.

Unsurprisingly, 59 percent of people injured in golf cart accidents were believed to be under the influence of alcohol shortly after the collision occurred. Alcohol use is very common on golf courses throughout the United States, and golfers often underestimate the fact that alcohol impairs the ability to operate a golf cart in the same way as it impairs the ability to operate a traditional motor vehicle.

“The most startling concerns were the large number of drivers who drank enough alcohol to impair judgment and their assertiveness when traveling on roads that resulted in collisions with motor vehicles,” says Dr. Brian McKinnon, the study’s lead author. “Golf carts weren’t intended for those purposes.”

In some parts of the country, golf carts are utilized in neighborhoods and retirement communities just as frequently as they are on the golf course. This, McKinnon says, is another reason that golf cart accidents and subsequent injuries have been on the rise. He also noted that the ambiguity in laws regarding who is allowed to operate golf carts is likely one reason that so many children are injured in these accidents.

In another study conducted back in 2008, Gerald McGwin of the Center for Injury Sciences at the University of Alabama found that injuries from golf cart accidents were highest among the 10- to 19-year-old age group. The next most frequent demographic was those aged 80 and older. McGwin’s study also looked at the most frequent types of injuries that typically resulted from golf cart accidents and found the following:

Vehicle design is one of the most significant contributing factors to all types of injuries from golf cart accidents, but even more specifically head injuries. Because golf carts are so similar to regular cars, people drive them in the same manner. But they are often not equipped with any of the safety features that are typically found in cars such as seat belts, anti-lock brakes and even doors to keep passengers from falling out of the vehicle.

Of all the golf cart accident cases that McGwin analyzed, he said a significant portion of those that involved injuries to children could have been easily prevented had parents and/or supervisors been more diligent in monitoring the children. Many of the head injury cases involved children who were driving golf carts alone, something McGwin says should never happen regardless of the setting.