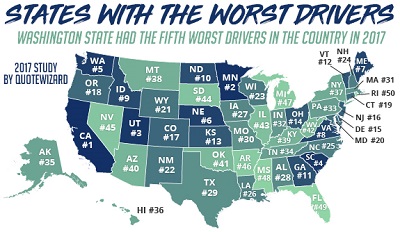 The drivers in Washington State are getting worse, and a study conducted by an insurance company found that our motorists are now fifth worst in the country.

After coming in at No. 9 a year ago, Washington is now ranked No. 5 for worst drivers in the United States.

Data collected from all 50 states shows that 37,461 people were killed on U.S. roads in 2016, according to the U.S. Department of Transportation. That was an increase of 5.5 percent over 2015. The study looked at the following: accidents, speeding tickets, DUIs, citations, and fatalities.

The Five States With The Worst Drivers

The Five States With The Best Drivers

Here’s what the study had to say about Washington and its No. 5 ranking:

“Is it the rain-soaked streets? Is it the legal weed? Is it Seattle's massive growth? We're not sure what's causing it, but the fact is that Washington drivers are less-than-stellar. From passive to inattentive, Seattle drivers have a particularly prickly reputation.

“Considering the fact that Washington went from 9th to 5th worst since 2016, we're prepared to blame the influx of transplants on the bad driving. Specifically, Washington's accident rate jumped from 33rd worst all the way to 14th worst since last year.”

If You’ve Been Involved In A Car Accident

At Davis Law Group, P.S., we will work with investigators and other professionals to determine the causes of your car accident and who is responsible. We will then assemble the team best able to fight for the maximum compensation your case deserves under the law.

If we accept your case, our promise to you is simple: You will be kept abreast of your case; you will be treated with the courtesy and respect you deserve; and you will pay us nothing unless we are successful in winning a settlement or jury verdict on your behalf.

Contact the award-winning personal injury lawyers at Davis Law Group today to request a free case evaluation. Call (206) 727-4000, use the chat feature below or fill out the form on this page to get started.