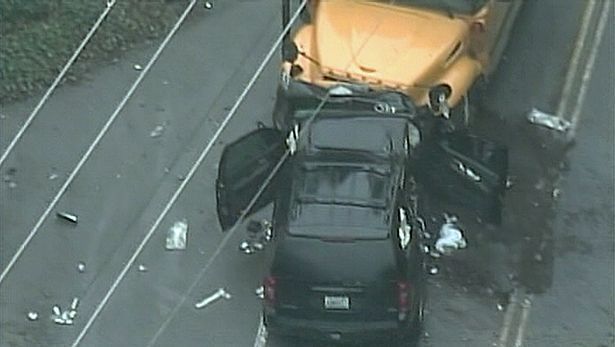 Two students reportedly suffered minor injuries after the driver of an SUV lost control and crashed into the school bus they were riding on in Lake Stevens on Tuesday morning.

According to news reports, the school bus was en route to Cavelero Mid High School at approximately 6:30 a.m. Tuesday when a Chevy Tahoe SUV lost control and crashed head-on into the bus.

In addition to the two students, three adults who were on board the bus were also injured in the crash. Police have reported that the crash was likely a result of the driver of the SUV crossing the centerline into the lane that the school bus was driving in.

Lake Stevens resident Brian Wilson, who lives next to the crash site, was one of the first people to respond to the scene.

“We were just in the bedroom and heard a big bang,” said Wilson.  “And I got up and came out and obviously seen the school bus down there, pretty scary deal.”

At-Fault Driver Found to be Impaired

The police report stated the driver of the Chevrolet SUV was in fact driving under the influence of alcohol or drugs. The driver who is unnamed is in his 20’s and sustained minor injuries but the passenger riding with him suffers from serious injuries.

They were both taken to Providence Hospital in Everett to be further treated. Depending on the resulting condition and injuries of the passenger in the SUV the driver will be citied for either or all of the following; reckless driving, DUI or vehicular assault.

"It sounds like some teeth went through lips, so lots of blood, but the students are very calm and just being checked out," Jayme Taylor stated, director of communications for the Lake Stevens School District. "It’s as calm as can be under the circumstances. Obviously a big mess with the debris and gasoline, but everyone's doing what they should be doing and staying calm.”

The driver of the school bus was taken to the hospital and the students were treated on the school.

If you or a loved one has been involved in a school bus accident, contact Davis Law Group.