Stoned drivers in Washington state are most likely to get in crashes from 4-5 p.m.

Saturday is their favorite day to do so.

And more drivers in Vancouver get into car accidents while high on weed than any other city in the state. 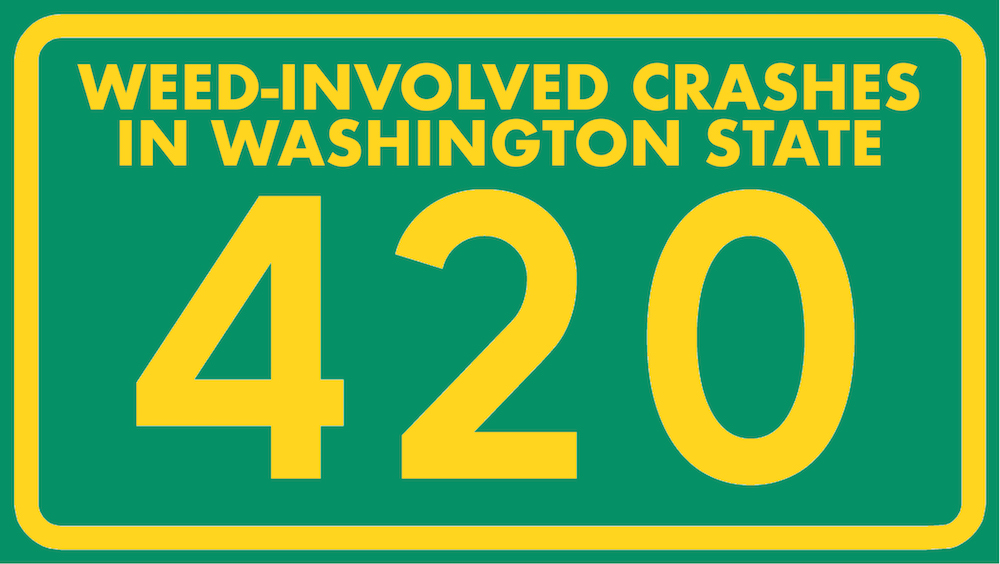 Those are the key findings of a recent study conducted by Seattle personal injury law firm Davis Law Group, which analyzed four years marijuana-involved collisions (2015-2018) reported by the Washington State Patrol. We share those findings on April 20 or 4/20, the national holiday for cannabis culture.

Only one cannabis-involved collision has been reported on 4/20 in the past four years: a 2017 collision in Snohomish involving a 19-year-old man. No one was injured.

There were 392 total marijuana-involved driving incidents reported in the time period studied, resulting in 37 fatal crashes. Additionally, there were 22 serious injury collisions, 110 minor injury crashes, and 215 collisions that did not result in any injuries.  Eight collisions were recorded as “unknown injury.”

Two-vehicle collisions made up a majority of the total incidents (188). There were 169 single-vehicle crashes and 35 collisions involving three or more vehicles. Intersections played a major role in these incidents (102 crashes, 26%).

Among major roads in the state, Interstate 5 was by far the trafficway with the most collisions involving marijuana (57). Interstate 90 (11 crashes) and Interstate 82 (10) also had their fair share.

According to a Gallup poll, 70% of people think that people who drive while impaired by marijuana are "not much of a problem" or only a "somewhat serious problem," whereas just 29% said it was a very serious problem.

Driving impaired by weed is serious and causes hundreds of auto accidents every year across the country. Davis Law Group aims to raise awareness by illustrating the statistics surrounding the issue in our own state. 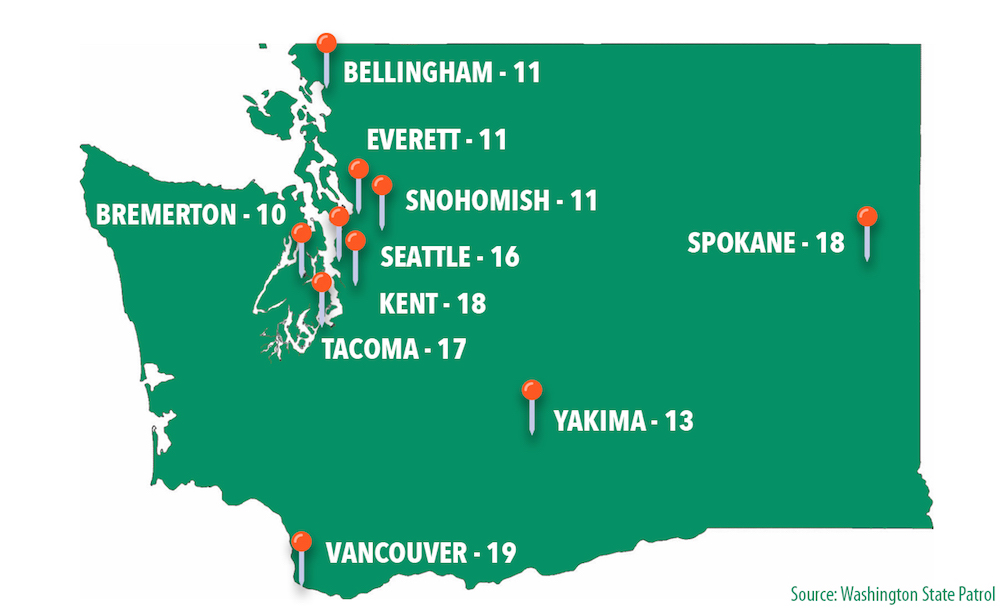 Vancouver comes in at No. 1 on the list with 19 weed-involved collisions from 2015-18. Despite having just the fourth-largest population in the state, Vancouver outdid big brothers Seattle, Spokane and Tacoma when it comes to driving while high. While just one of these collisions was fatal and one was serious injury, it speaks to the prevalence of stoned driving in the city.

Days of the Week for Weed-Involved Collisions

It comes as no surprise that the most common days for weed-involved crashes is the weekend. Saturday (68) comes in at No. 1 on the list, with Friday (61) and Sunday (59) No. 2 and No. 3, respectively.

The other days of the week are fairly similar, with Monday (45) the least likely day for marijuana-related crashes. 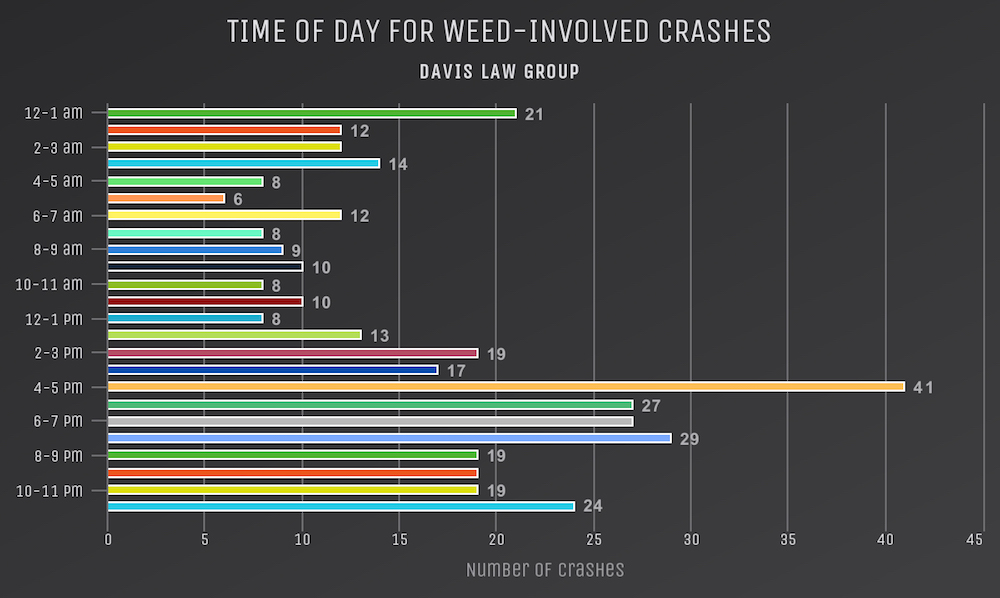 Drivers across Washington are most likely to encounter a stoned driving collision from the hours of 4-5 p.m., and in the early evening hours in general. The evening commute times see the most cannabis-involved crashes, eclipsing the 11 p.m. to 1 a.m. window that also sees high drivers involved in wrecks.

According to the Washington State Department of Licensing, “Driving under the influence (DUI) refers to operating a vehicle while affected by alcohol, drugs, or both. This applies to both legal and illegal drugs, including prescription medication and over-the-counter drugs.

Anybody who operates a motor vehicle within Washington state is deemed to have given consent to a test or tests of his or her breath or blood for the purpose of determining the alcohol concentration or presence of any drug in his or her breath or blood if arrested for any offense where, at the time of the arrest, the arresting officer has reasonable grounds to believe the person had been driving or was in actual physical control of a motor vehicle while under the influence of intoxicating liquor or any drug.

Washington state has a per se drugged driving law enacted for cannabis.

Under Washington state's law, motorists with detectable levels of THC in the blood above 5 ng/ml are guilty of driving under the influence of drugs (DUID).

If you or someone you love has suffered an injury in any kind of drugged driving accident anyplace in Washington state, contact attorney Chris Davis and the team at Seattle-based Davis Law Group for a free, no-obligation consultation.

Mr. Davis will work on a contingency basis, which means that you don’t pay any attorney’s fees until he wins compensation for you. Discuss your case with the experienced team at Davis Law Group and let us take care of the rest.