State of Emergency Declared in Atlanta After Bridge Collapse 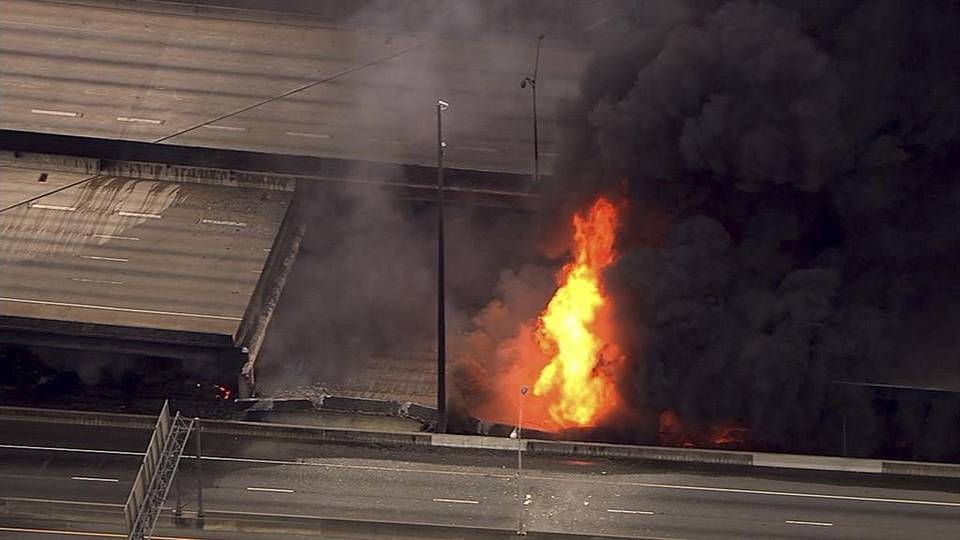 An aerial shot of the fire and the collapsed portion of the bridge. Image source: The Charlotte Observer

A fire that began under a bridge on Interstate 85 caused a portion of the elevated highway to collapse on Thursday night. Hot spots from the fire were still active as of Friday morning, preventing engineers from surveying the full extent of the damage. Investigators believe that plastic pipes that had been stored under the highway caught fire, causing structural damage to the interstate above the flames.

Emergency responders closed a three-mile stretch of the highway in both directions and asked Atlanta-area commuters to find other routes. The closure blocked a major artery that runs through Atlanta, causing city-wide traffic delays. The road carries 250,000 vehicles on a normal weekday.

Governor Nathan Deal declared a state of emergency. The bridge collapse took out the northbound lanes of the highway; the southbound lanes also sustained damage that needs to be repaired before the road can reopen. Until then, other highways in the area will be overloaded with traffic.

No injuries were reported among drivers or firefighters as a result of the bridge collapse. The fire had been burning and sending up dark smoke for a while before the collapse

Was This an Accident, Foul Play, or the Result of Poor Maintenance?

A spokesperson from the Department of Transit told reporters than the fire began in a spot that was “a secured area containing materials such as PVC piping, which is a stable, non-combustible material.” Officials are not yet sure how the fire started or how it managed to burn hot enough to cause the collapse of the bridge above it.

Officials from the federal government have awarded Atlanta $10 million in emergency funds to repair the highway. The funds will be from a “quick release” program that will be available to workers making essential short-term repairs within the next few weeks. Longer-term repairs will be needed to completely replace the stretch of damaged highway.

The funds may be too little, too late for an infrastructure system that is already under immense strain. The section of Interstate 85 that collapsed was first built in 1953; in 1985, it was reconstructed to handle higher traffic volumes in a rapidly growing city. Atlanta has since experienced a population explosion, stretching its public transit system to the limit and putting more cars than ever before on its roads.

At the same time, funds for maintaining aging infrastructure are drying up across America. For years, engineers have been warning the public that public works are crumbling all around the country due to lack of care. Many cities rely on roads from the 1950s and 1960s, despite population booms that have put unprecedented numbers of vehicles on those roads. As more young people move into city centers, metropolitan areas are scrambling to accommodate them with public transit and pedestrian improvements while they also budget for road and bridge maintenance.

Once every four years, the American Society of Civil Engineers publishes an Infrastructure Report Card, grading national infrastructure categories on a scale from A to F. Consistently since 1998, America has earned an average of a D on infrastructure maintenance and improvements. The problem: America just isn’t investing in expensive and lengthy maintenance projects, and until it’s willing to do so, its infrastructure will keep crumbling.

If you have been involved in an accident caused by a bridge collapse, contact Davis Law Group.