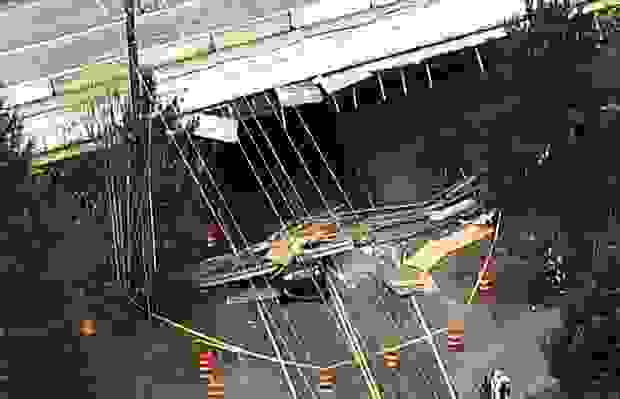 UPDATE: Bonney Lake police say that they found a total of three people - a man and woman in their 20s and what is believed to be their infant boy - inside of the truck involved in the construction accident on Angeline Road Monday.

Our thoughts and condolences go out to the victims' family and loved ones.

ORIGINAL STORY: Pierce County officials say that a driver was killed in a construction accident Monday morning after a large piece of concrete fell off the overpass and landed on top of a vehicle below.

According to KOMO, an unidentified person was driving a pickup truck on Angeline Road just after 10am Monday when a large piece of concrete came loose from the State Route 410 overpass. The concrete slab fell down onto Angeline Road and crushed the entire vehicle.

“We found that the jersey barrier that covers SR-410 that was being worked on by construction workers came loose from the overpass and fell onto Angeline Road and struck one vehicle that was traveling north on the road,” says Bonney Lake Police Officer Todd Green. “When it fell off the overpass, it landed square on the roof of the vehicle.”

Green told reporters that officials have not yet been able to identify the driver, nor have they been able to determine if anyone else was inside the vehicle at the time.

Should Angeline Road Have Been Closed to Traffic?

Naturally, this tragic construction accident has officials wondering if Angeline Road should have been closed to traffic to potentially avoid any sort of safety issue.

“That really is in the responsibility of the contractor to decide whether it is to be closed down,” Green said. “Right now it looks like a very sad accident.” He added that police would like to speak with anyone who may have witnessed the accident.

A separate news report from The News Tribune cited a city newsletter in January that explained the difficulty of the construction project due to its location on the overpass. A resident who lives down the road from the construction site also mentioned that the construction crews had been flagging traffic as a precaution during previous days, but not on Monday.

From a legal perspective, the two biggest question marks surrounding this fatal accident are (a) why Angeline Road wasn’t closed to traffic while the project was ongoing, and (b) why the contractors did not have people flagging traffic on the day that the accident occurred, despite having them in the previous days. Of course, the official investigation into the accident should provide the victim’s family with answers to these questions.