UPDATE: April 23, 2015 - KIRO News published a story this morning indicating that the pedestrian who was pinned between the Snohomish County deputy's police cruiser and the pickup truck had to have both of his legs amputated.

According to the article, the 59-year-old Arlington man underwent numerous surgeries at Harborview Medical Center in Seattle in an effort to save his legs, but the damage was so severe that they ultimately had to be amputated. 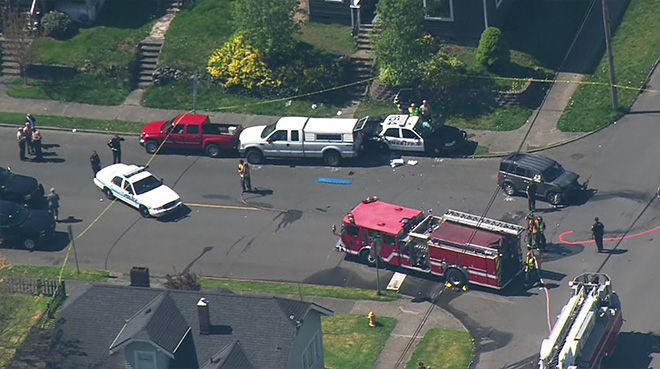 According to news reports, a deputy was driving his patrol car southbound on Rockefeller Avenue when a 2008 Honda Element traveling westbound on 23rd Street struck the driver’s side of the patrol car. That collision pushed the patrol car into a pedestrian, pinning him up against another vehicle.

“There was a pedestrian that was walking, they were injured as well,” said Everett police officer Aaron Snell. “They sustained significant injuries and was transported to Harborview.”

Aside from the pedestrian, four other people were reportedly injured in the crash and taken to a local hospital for treatment. Snell said there were three people, including the deputy, inside of the patrol car at the time of the collision. There was no additional information available regarding their injuries or condition.

It initially appeared as though the driver of the Honda Element would be likely held liable for causing this collision since the police car was already in the intersection when he was struck.

The WSP initially only said that the cause of the crash was a failure to stop at a stop sign, and initial news reports appeared to suggest that the driver of the Honda was to blame. However, there is no traffic signal or stop sign at the intersection of 23rd Street and Rockefeller, and the WSP later elaborated that the deputy ran a stop sign.

This clarification is helpful for all parties who may have been injured in the pedestrian accident, as both could potentially file a claim for their injuries and other damages against the deputy. All parties involved could potentially benefit from having someone assist with investigating the crash and ensuring that clear liability for all of the victims’ injuries is established as soon as possible.

Snohomish County Police Have A History Of Hitting Pedestrians

In October of last year, a Snohomish County Sheriff’s Office deputy driving a patrol car struck a pedestrian with his patrol car.  According to reports, the deputy was driving on state Route 92 near Callow Road early on a Saturday morning when he hit a pedestrian.  The victim was taken to Harborview Medical Center.  Very few details appeared in published reports and nothing is known about the pedestrian’s injuries.

If you or a loved one has been injured in an accident due to the negligence of another party, call the personal injury lawyers at Davis Law Group to speak with our team about your case and to request a free legal consultation.