Realizing that the anniversary of the collapse will renew interest in their experience on that terrifying day and that people will be interested in how they are doing now, Dan and Sally Sligh have decided to release a statement.   The following is their attempt to answer the questions they are asked most often. 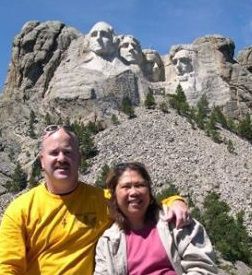 What are your thoughts and feelings on the anniversary the Skagit River Bridge collapse?

We are working hard on putting the extraordinary, life-threatening experience of surviving the bridge collapse behind us.  We are focused on getting on with our lives.  It’s been a very tough year for both of us—emotionally and physically—but we are hanging in there. A day doesn’t go by where we don’t think about what happened.  We feel very, very lucky to have survived.

What are your strongest memories of the Skagit River Bridge collapse?

Everything that happened on the bridge that day was like living a scene from a movie.  It all happened so fast.  The loud boom that sounded like cannon fire; a huge puff of dust; feeling the road fall away beneath us; falling; hitting the water; and feeling the impact of crashing into parts of the fallen bridge.  I truly thought it was the end for both of us.

The next thing I remember was feeling cold water rushing into our truck—that’s when I realized that I was still alive.  But my wife was unconscious and sinking into the water that was filling the cab of the truck.  I wasn’t sure if she had survived.  I felt a little confused for a moment and I wasn’t able move my shoulder which had been dislocated.

Then all my naval water search and rescue training instinctively kicked-in.  I knew I had to do something quickly to stabilize the situation and get us out of the cold water or we might die there.  I engaged the parking break to try to stop us from slipping further into the water.  I relocated my shoulder so I could use both arms to try to get to Sally.  The collapsed roof of our truck acted like a barrier between us but I managed to get to her; unbuckled her; revived her; brought her to the driver-side of the truck; then made it out of the door and climbed onto the running boards of the truck where we spent the next 90 minutes waiting to be rescued.

What will you be doing on the anniversary of the Skagit River Bridge collapse?

We will be trying to make it as much of a ‘normal’ day as possible.  We have plans to be with family and friends.  We will not be watching TV news coverage of the anniversary.  We just want to have a normal, uneventful day.

How important do you feel your navy training was to your survival that day?

As a career sailor with 28 years of service in the US Navy, I have had trained for unexpected, dangerous situations---especially water search and rescue.  I had training assessing disaster situations; planning and executing water rescues; life expectancy timeframes in various water temperatures; and emergency medical treatment.  All of this helped me stay calm and meet the challenging situation that we found ourselves in that day.  It was as if the true purpose of all my past training was to prepare for this one moment.

My training allowed me to act instinctively and do what had to be done in that moment.  But nothing I trained for could prepare me for the fear that I was going to lose my wife.  OR the fear that we might both die in the Skagit River and leave our two daughters without parents.  You can’t prepare for that.

What has life been like since the Skagit River Bridge collapse?

Although Sally and I both are still suffering, both physically and emotionally, from what happened that day on the Skagit River.  Seeing news reports or being asked about it by strangers can difficult---it can cause us to relieve it all over again, which is particularly hard for Sally.

Surviving bridge collapse has strengthened our relationship; brought us closer to each other and our daughters.  We have a greater appreciation for life and try not to take anything for granted.  It’s like that Tim McGraw song, “I hope you get the chance to live like you were dying.”  Facing possible death changes how you look at everyone and everything in your life.  We thank God every day.

Were you and your wife injured in the bridge accident?

Sally and I were both injured in the crash are still receiving medical treatment for some our injuries.  As you know, Sally was hospitalized following the accident.  And once the adrenaline wore off I began to realize that my injuries were not as minor as I had hoped.  But we are just dealing with the problems, getting treatment, and trying to focus on being thankful that things aren’t much worse.  I’d rather deal with these problems than face the alternative.

Have you been across the Skagit River Bridge since it was repaired?

The answer is, no.  Absolutely not.  Getting anywhere near bridges fills both Sally and I, and our children, with fear and anxiety.  Panic attacks, feeling dizzy, hearts racing, shortness of breath, hyperventilating—it’s just too much.  A bridge of any height or span is just terrifying.  It’s very inconvenient for people who live on an island.

Before the accident I had no idea that thousands of people, who have not been through what we experienced, have a terrifying fear of bridges.  There is even a name for it---gephryophobia: “irrational fear of crossing bridges”—doesn’t seem irrational to us.  We have only left Whidby Island only a few times since the accident.  We now go miles out of our way to avoid bridges if at all possible.

That is one bridge that we will not be crossing when we come to it.  We will take the long way around instead.

What else would you like to tell us about that day?

Sally and I have not had the opportunity to publicly thank the first responders, multiple police and fire departments, state troopers, emergency rescue crews, the Red Cross and good Samaritans who all worked together to save us from the cold Skagit River.  Their teamwork saved us and prevent others from being injured in this disaster.  We’d like to say, “thank you!”