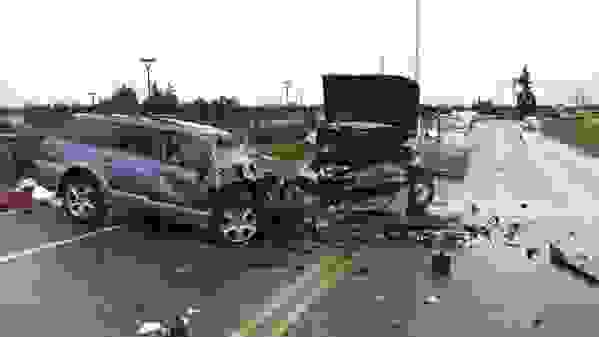 Officials with the Mason County Sheriff’s Office are trying to determine what may have contributed to a fatal head-on collision on Johns Prairie Road in Shelton Monday evening.

According to The Olympian, an unidentified woman was driving behind a vehicle that kept crossing the centerline. While the witness was on the phone, the erratic vehicle struck a pickup truck traveling the opposite direction head-on.

A sheriff’s deputy responding to the woman’s call arrived at the scene shortly after the crash occurred and found the two vehicles involved heavily damaged. The deputy, assisted by a U.S. Army medic who had also witnessed the collision, administered first aid while emergency rescue crews were on their way.

The pickup truck driver, identified as 47-year-old Brian Phipps, was airlifted from the scene of the collision to Harborview Medical Center in Seattle to be treated for his injuries. Officials did not provide any additional information about Phipps’ condition at the hospital.

Police Say Driver May Have Had Medical Issue

The driver of the vehicle that had been behaving erratically was badly injured in the crash and was taken to a nearby airfield to be transported to Harborview as well. She died from her injuries while she was being taken to the airfield. She has been identified as 53-year-old Andrea Tyrone of Seattle.

Though the witness driver had initially called 911 to report a potentially impaired driver, investigators believe there is a chance that Tyrone suffered a medical episode that may have contributed to the collision. If this is the case, it could impact the injured victim’s ability to pursue a claim for damages.

An unforeseen medical episode can raise questions about liability in car accident cases, as it can sometimes be argued that certain unforeseen medical conditions do not constitute negligence. These issues vary on a case-by-case basis, so it is best to consult with an attorney about any potential factors that could come into play.

Injured in an accident? Contact an experienced car accident lawyer for assistance.