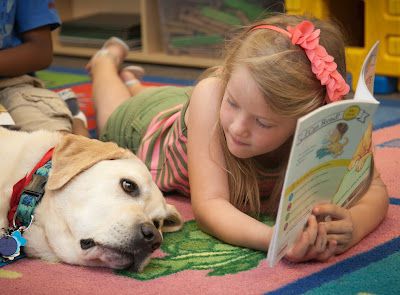 When young children become victims of child abuse, it can be difficult for them to report the abuse or to talk to prosecutors and law enforcement about their alleged abusers. It’s quite understandable that young children who have already endured horrifying and traumatic experiences would have trouble trusting a stranger during such a scary time.

Gina Coslett is a child interview specialist at Dawson Place in Snohomish County, a non-profit child victims’ advocacy center that provides victim services to children and their families who have been affected by sexual or physical abuse. Coslett recently received a surprise gift that will help her better communicate with child victims at Dawson Place; a two-year-old Labrador retriever named Harper.

Last year, Coslett worked with Stilson, a black Labrador that works in the Snohomish County Prosecutor’s office and has also spent time at Dawson Place. Since then, Coslett has been waiting about a year to be paired up with a more permanent assistant like Harper. Now, the lifetime service dog helps provide comfort to children who are in an otherwise uncomfortable situation while Coslett asks them about crimes they have either fallen victim to or witnessed others committing.

As a forensic interview specialist, Coslett’s job is to ask questions and get the details about alleged child abuse. Even though emotions may run high during these interviews, Coslett must remain objective and neutral because her job is to uncover facts, not comfort or counsel abuse victims. The children’s parents aren’t allowed to be present for the interview either.

That’s where Harper, and the many other service dogs like him, come into play. After starting at the Snohomish County Prosecutor’s Office in 2006, Stilson did such a great job that people believed they could use his help at Dawson Place. At the time, Stilson was only the second service dog in the entire country that was helping prosecutors communicate with child victims.

“It’s so hard not to reach out, whether I believe them or not,” Coslett says of the children she speaks with on a daily basis. But Harper’s ability to pick up on a child’s cues and comfort them during the interview makes Coslett’s job much easier.

“She knows she’s there to comfort,” Coslett said of Harper. “She takes over and knows what to do.”

For Coslett, Harper makes the daily task of getting traumatized children to speak with her about alleged abuse much easier. And for the children she interviews, the lovable service dog acts as another set of ears and a comforting companion to child abuse victims.