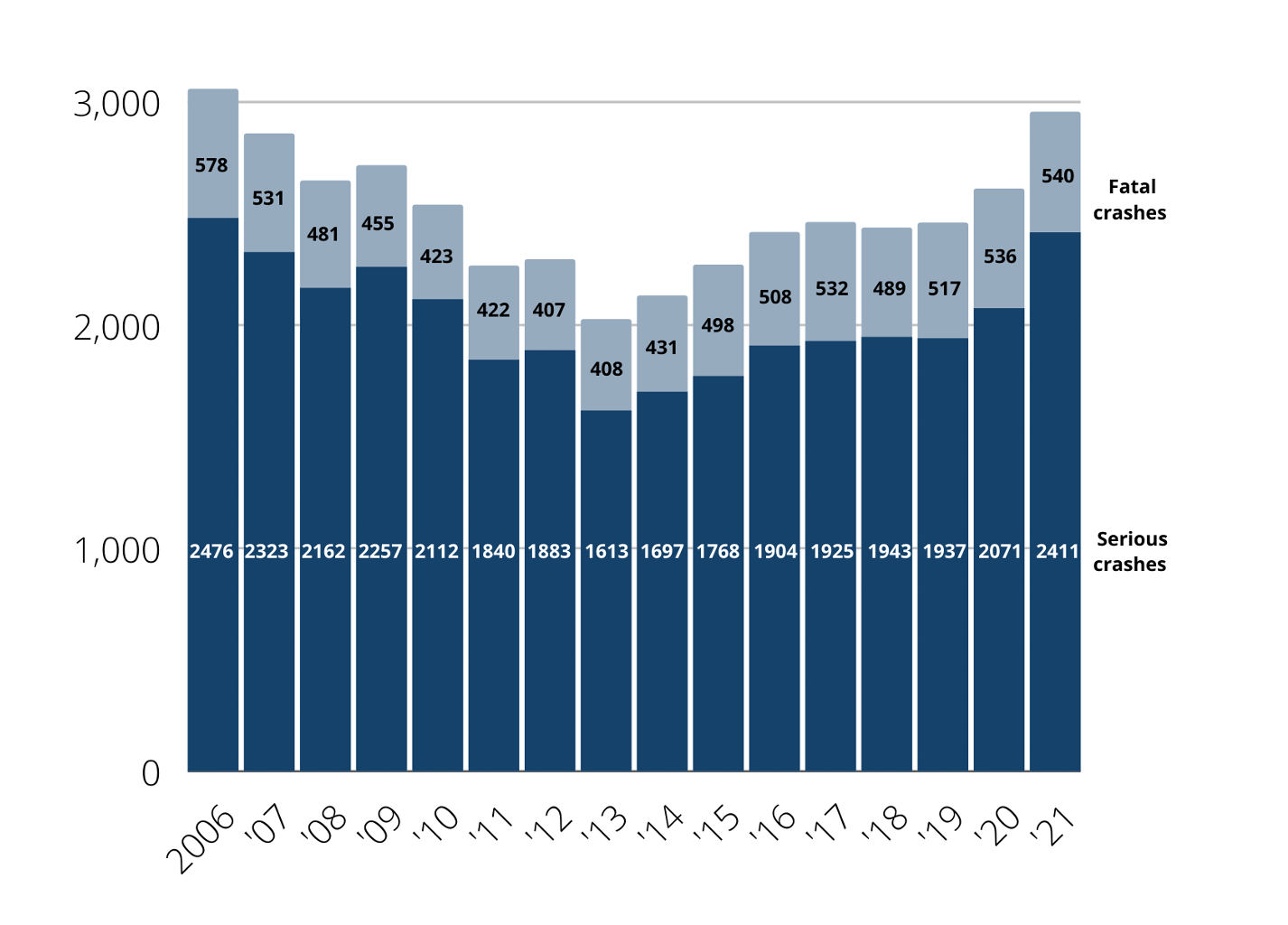 In an article published last week, The New York Times highlighted a concerning trend: deaths from auto accidents have spiked during the pandemic. This revelation is particularly head-scratching for traffic safety experts at a time when there should be fewer people on the roads, and thus fewer accidents altogether.

After reviewing the nationwide data presented in The New York Times article, the team of researchers at Seattle-based Davis Law Group sought to explore if there is a similar trend in our home state of Washington, and also to uncover which other factors could be contributing to an increase in fatal crashes during a time when vehicle traffic has declined.

Simply put, deaths from auto accidents across the United States have been on a steady decline for the past 60+ years. Experts attribute this primarily to the combination of gains made in vehicle safety features, lower speed limits, and increased emphasis on and enforcement of impaired driving laws.

When government shutdowns associated with the COVID-19 pandemic started to pick up in early 2020, a reasonable person might have expected crashes, injuries, and especially deaths to drop even more sharply, if anything.

In reality, the opposite happened. The total number of vehicle crashes in the United States spiked in summer of 2020, even as government shutdowns remained in place and businesses reduced operations or shut down altogether. And this troubling trend has continued throughout the pandemic.

The data presented in The New York Times article shows that per-capita fatal crashes in the United States increased 17.5 percent from the summer of 2019 to the summer of 2021. The Times called this the "most severe increase in traffic deaths since the 1940s."

Although traffic deaths in Washington hit a four-year plateau from 2016-2019, our home state was not immune from the troubling nationwide trend. Washington saw a large increase in serious and fatal crashes between 2019 and 2020, during the early months of the pandemic. There was a smaller yet significant increase in the frequency of serious traffic-related injuries and fatalities between 2020 and 2021.

The incidence rate per capita fluctuated very little between 2017 and 2019, with 0.0074%, 0.0072% and 0.0073% respectively. But there was a 5.5% increase between 2019 and 2020 with an incidence rate of 0.0077% per capita. This past year the rate has continued to climb, currently sitting at 0.0079% per capita. There has now been an 8% increase in traffic deaths per capita in Washington when comparing current numbers to those from 2019, and we still have half a month to go, not to mention that there can be a delay in data being uploaded to the Washington State Patrol website.

But Washington's roadways were even more deadly 2021, with a reported 2,951 total crashes involving serious injury or death. That's the state's highest number of serious injury or fatal crashes on record since 2006. Davis Law Group briefly explored this trend last year during our extensive coverage of the 2021 100 Deadliest Days.

The biggest question prompted by this data is an obvious one: what is causing car accidents involving serious injury and death to spike over a period where there are fewer vehicles on the roadway and fewer places for American drivers to go?

Serious and fatal crashes involving drug or alcohol impairment increased 25% from 2019 to 2020, and remained at a comparable level in 2021. Speed was also 18% more likely to be a contributing factor in 2020 compared to pre-pandemic levels. Some experts believe that these factors could cause what would otherwise be minor accidents to result in more serious injury or even death.

A Trend To Monitor Moving Forward

If you live in Washington, you know that the decrease in traffic in the larger cities did not last. It seems that morning and afternoon commuters are back, even if not fully, clogging up the roads and freeways. Despite many restrictons that are still in place, keeping people home, fatal accidents are continuing to rise to numbers beyond what they were pre-pandemic.

To put it another way, 79 out of every one mllion people in the state died in a car accident this past year. This is certainly not keeping us on track for the goal of zero traffic related deaths. Needless to say, this will be an important trend for safety advocates to keep an eye on from here on out. Transportation officials in Washington are undoubtedly discussing ways to curb the trend, and it will be interesting to see which infrastructure, funding, and policy decisions are made in Washington over the next year or so in response to this data.

"Our office has seen a significant increase in the number of crashes involving serious injury or death over the last two years," says Chris Davis, principal attorney at Seattle-based Davis Law Group. "And now that traffic volume appears to be returning to pre-pandemic levels, this problem is unlikely to get any easier to solve."

Accident victims should be aware of their legal rights after an accident and take steps to protect their legal interests after being injured in a crash. Consulting with an experienced attorney is one of the easiest ways to get helpful information and answers to your questions after a serious car accident.

Call Davis Law Group at (206) 727-4000 or use the confidential contact form on this page to request a free legal consultation with our award-winning team of car accident attorneys. If we believe we can help you get the best possible result for your case, you won't pay anything until we recover compensation on your behalf.