Sheet Metal Flies off Truck, Strikes Woman’s Car on I-5 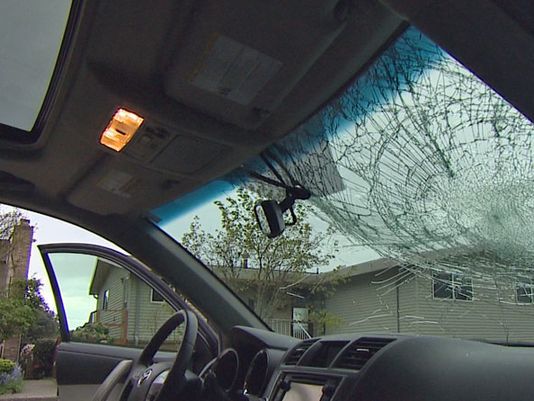 A Seattle woman is thanking her lucky stars after a piece of sheet metal flew off of a semi truck and crashed into her car windshield on Interstate 5 near Boeing Field Monday night.

According to KING5, Tara Turpin was driving with her 15-year-old daughter in South Seattle when a semi truck began to pass her on the left. That’s when she says the unexpected happened.

“A semi-truck passed us on the left and he got about three car lengths ahead of us and a large piece of metal flew out from the back of his truck,” Turpin told reporters.

The sheet of metal landed directly on the windshield of Turpin’s Toyota, immediately shattering it and sending glass flying throughout the interior of the vehicle. The glass shards covered Turpin and her daughter, but thankfully she was able to maintain control of the vehicle and safely pull over to the side of the freeway.

Turpin and her daughter were shaken up from the collision, but otherwise did not suffer any significant injuries in the collision. However, they were unable to take down any identifying information about the truck and Washington State Patrol officials are asking the public for help locating the driver of the truck involved.

Driving with an unsecured load in the state of Washington is illegal, and carries a punishment of up to FINISH. But the ramifications go beyond cluttering the roadway with debris and trash. According to the AAA Foundation for Traffic Safety, vehicle-related road debris accounts for more than 25,000 crashes every year in North America. There are also an estimated 80-90 fatalities annually resulting from these preventable accidents.

On a local level, the state Department of Ecology says there is an average of 400 vehicle accidents involving roadway debris each year in Washington state. Turpin and her daughter are lucky to have avoided being injured in this accident, but officials are still hoping to identify the driver responsible for losing the metal sheet that struck Turpin’s vehicle.

If you or someone you know witnessed Monday’s incident on I-5 near Boeing Field, the Washington State Patrol is asking that you contact them with any information you may have. Turpin’s vehicle was significantly damaged and the at-fault driver should be held responsible for that damage.

The award-winning Seattle personal injury attorneys at Davis Law Group have helped accident victims hold wrongdoers accountable since 1994. Call our office in Seattle at (206) 727-4000 to request a free legal consultation with our team.