Bad Design? Series of Semi Crashes on I-5 Curve in Tacoma 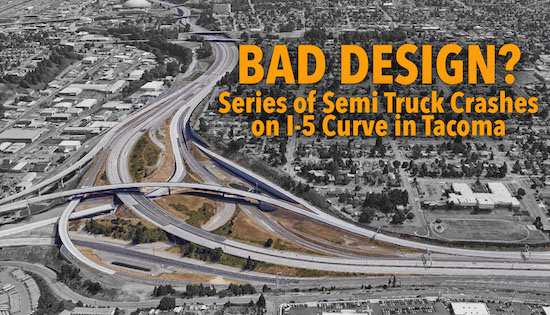 If you spend any time driving in or around Tacoma, you are likely familiar with a quarter-mile stretch of Interstate 5 that is notorious for crashes.

The location — near the I-5 and State Route 16 interchange — has seen plenty of devastating crashes involving semi trucks in the past year. In fact, there have been eight high-profile semi truck collisions since September 2018.

Most all of the crashes follow the same script:

Continue reading for details on the crashes, the configuration of the highway and what solutions are being proposed.

Background on the Interstate 5-SR 16 Collisions

The current configuration of I-5 has been in place since May 2018. Road work in the area is part of the Interstate 5-SR 16 project that will introduce direct-access ramps to connect HOV lanes. Part of that work includes the realignment of I-5 in both directions. Construction is expected to be complete by May, then the same thing will happen on the Puyallup River bridge overpass.

The current alignment of I-5 seems to be making things more problematic. The highway is separated by temporary concrete jersey barriers. When a large truck collides with that barrier, it is pushed into the oncoming lanes.

The construction zone features lanes that are only 11-feet wide instead of the normal 12-feet lanes. That meets state and federal guidelines, but leaves very little shoulder space (sometimes 4 feet or less) and barely any room for large trucks to maneuver.

Washington State Department of Transportation says the contractor for the project has been conducting weekly reviews. Additional reflective striping and lane marking was added to the area in December.

WSDOT has placed the blame firmly on the speeding truckers that travel through the area, not the roadway design.

"It is absolutely safe. Over 200,000 people drive on this section of I-5 every single day and they make it through this section successfully, without issue, without incident,” a WSDOT spokeswoman told KING5.

Starting the week of April 8, 2019, new signs will be posted in both the northbound and southbound lanes of I-5 in Tacoma and Fife dropping the speed to 50 mph. The speed drop stretches between South 48th Street and continues through two major construction zones to the Port of Tacoma Road.

The old speed limit was 60 mph. WSDOT says the new speed limit is enforceable as soon as the signs are posted.

WSP troopers will be doing extra speed patrols to make sure people follow the new limit.

"The reduced speed limit is the result of a coordinated effort between WSDOT and the Washington State Patrol to reduce the potential for collisions in the work zones," WSDOT said.

Is the Current Configuration a Dangerous Design?

While state government organizations maintain that the crashes are speed related, truckers feel the design of the road is to blame.

"It's a pretty big challenge," one trucker told KOMO. "You've got to be really careful. You have to watch that corner. If you're in the right hand lane if you swerve at all your bumper is right on that."

Many trucks are so long that drivers struggle to keep the axles in the same lane. When combined with speed, wet roads and darkness, this stretch can be a nightmare for truckers.

In the event of a crash, it’s standard for a driver, the company they work for, or a vehicle parts manufacturer to be held liable for causing the incident. But there are cases where the victim and their attorney turn their attention on the design of the roadway and how it might have led to the crash.

Most roadways are designed and maintained by the states or the federal government or local municipalities. A poorly designed ramp or misplaced signage, along with other flawed design features, can lead to severe injuries to unwary motorists. Since a city, state or the federal government is responsible for highway design, an injury claim would be presented against these entities.

Defective roadway design cases are typically difficult and take years to complete. It takes an experienced car accident attorney to look at all the factors involved and examine possible roadway flaws, maintenance issues, or lack of signage that contributed to the accident. Even when victims have a solid case for a defective highway design claim, government entities routinely deny them.

Regardless of what you believe caused your accident with a semi truck, you are welcome to come and speak with the attorneys at Davis Law Group about your case. You have nothing to lose with our free case evaluation offer.

Victims of truck accidents who hire an attorney receive on average 3.5 times more in settlement money than those without legal representation. The aggressive tactics by the trucking company and their insurance carrier can be overwhelming. Have a truck accident lawyer on your side to even the playing field.

You or a loved one may be entitled to financial compensation if you were involved in an accident caused by a poor highway design. For a free case evaluation to discuss your case, your injuries and your legal rights, contact attorney Chris Davis and the team at Davis Law Group today.