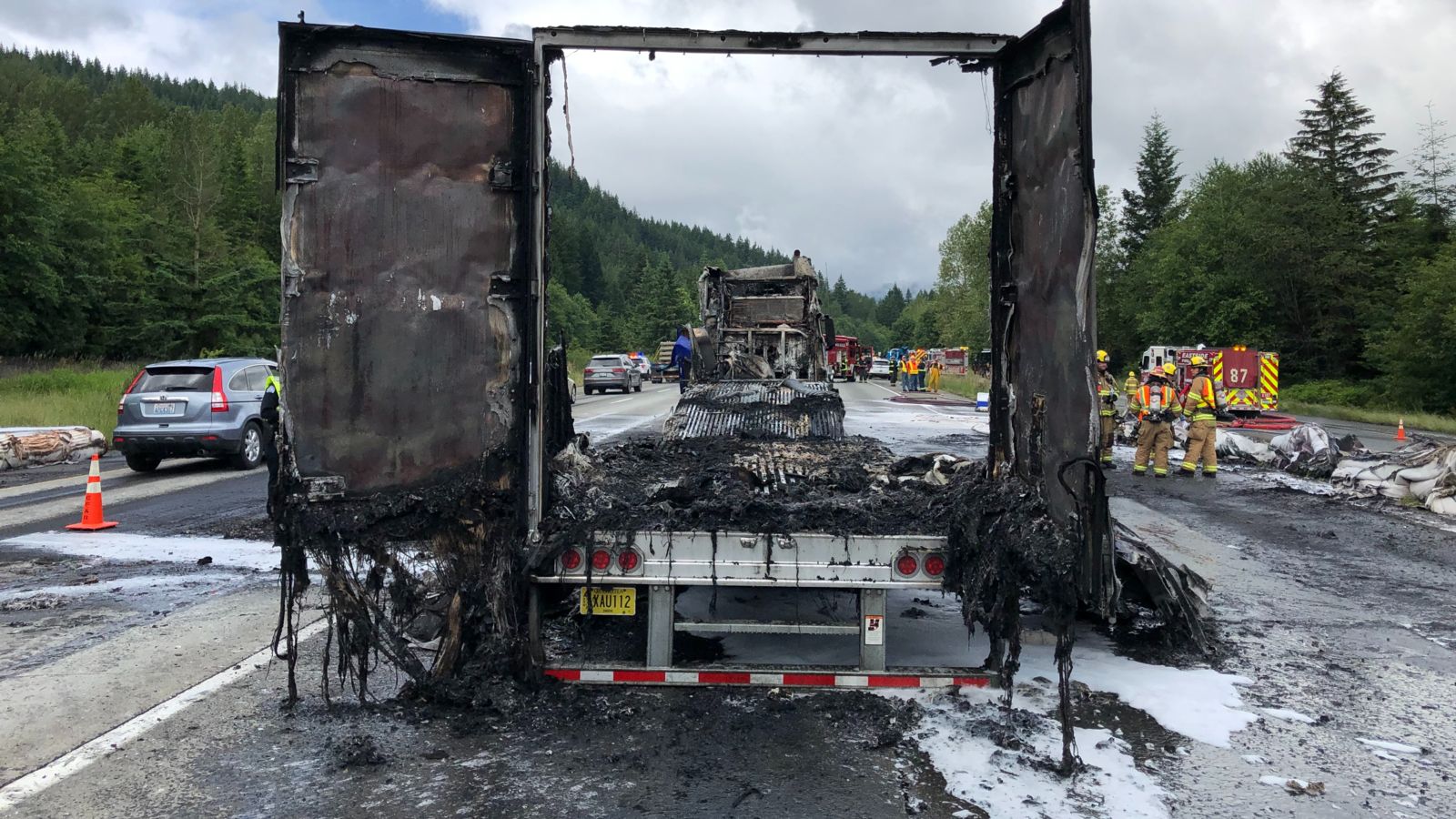 One person was injured in a semi truck accident that left I-90 closed for hours as the vehicles involved burned.

The crash took place in the westbound lanes of I-90 just east of the connection with SR 18 near North Bend, on Tuesday morning.

State troopers from the scene reported one passenger taken to Harborview medical Center but did not report specifics of the severity of their injuries.

From the scene WB 90 MP 27. ⁦@EastsideFire⁩ pulling all carpet off the truck to insure fire is out. pic.twitter.com/PCOacVnyem

This crash was just one of several in a busy day on this area of the I-90 corridor with additional car fires later in the day as well as a crash that resulted in the spilling of anti freeze and motor oil on the roadway.

Highway 202 is temporarily closed due to a car fire. @EastsideFire and @SnoqualmieFire on scene pic.twitter.com/YopfNNLdjd

Thankfully it does not appear there were additional significant injuries from these accidents.

After a crash with any vehicle, first responders and investigators take their time to clear the scene, documenting evidence and caring for those involved, in these crashes however, first responders were called upon to clean up huge spills, and put out massive fires while caring for injured drivers at the scene.

A truck fire can be incredibly dangerous given their massive size, cargo and fuel capacity, the flames from a single semi truck could start additional small fires.

Semi truck accidents even not involving a fire are some of the most dangerous on our roadways and are more likely to result in serous injuries and deaths than your average passenger car accidents for numerous reasons including simply the size disparity between the vehicles.

Dangerous truckers or even trucking companies who have patterns of more dangerous behavior can be reported via multiple safety and monitoring systems to help prevent an accident, but unfortunately once an accident has happened it's too late and drivers who are injured by their negligence need answerers to questions as simple as how to their medical bills.

That's why Davis Law Group offers free case evaluations for accident victims to help them understand the best path forward for their insurance claim, and know what to expect in a settlement for a semi truck accident.

The award-winning accident attorneys at Davis Law Group have been helping accident victims in the state of Washington for more than 20-years and can help you too.

To request your free case evaluation call 206-727-4000 or use the chat or contact option on this page today.