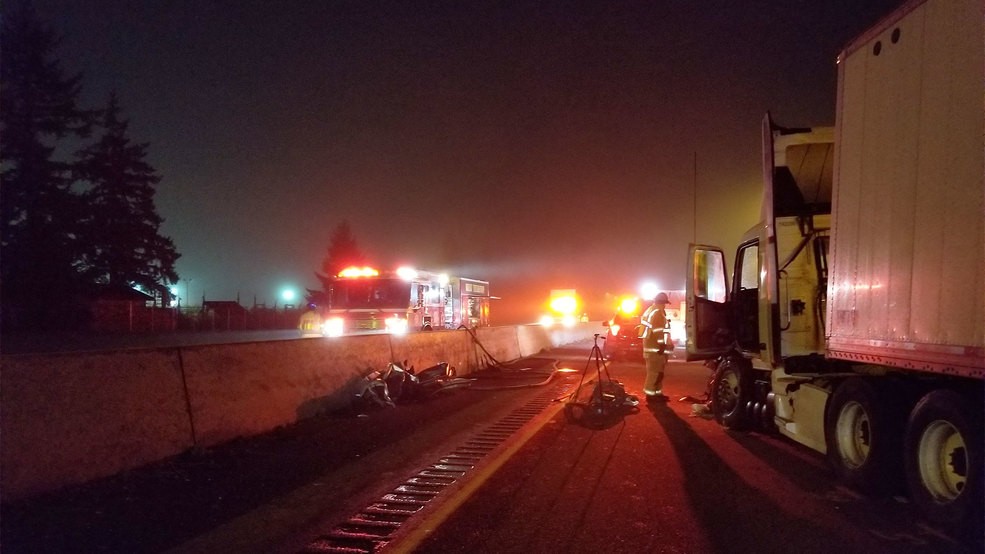 Two people are dead after a crash involving a semi truck in Thurston County just after midnight Thursday morning.

According to Washington State Patrol (WSP), the collision involved a wrong way driver behind the wheel of their Hyundai Sonata traveling north in the southbound lanes where the vehicle collided head on with a semi.

The identities or any relationship between the two deceased have not been released at this time, and further information from the investigation that closed the road until just after 5 a.m.

Wrong way driver accidents are nothing new for the area unfortunately, with several recent accidents making the news in the last few months alone.

While more information will be released as investigators do their work, it would be reasonable to expect that WSP findings to indicate the wrong way driver was at fault in the collision.

The passenger however, who is unknown and whose relationship to the driver is also currently unknown, would most likely not share liability, again outside of special circumstances.

When a passenger is hurt or killed in a wrong way driver crash, they have the same legal rights afforded to them as anyone who was harmed by the driver outside of the vehicle unless it is found that they somehow contributed to the collision in some way.

Without more information it is impossible to know what caused the driver of the Sonata to enter the southbound lanes, or what happened in the moments leading up to the collision with the semi, but as information comes out, investigators and the loved ones of those who passed should be able to put the pieces of those fateful moments together to better understand what caused the horrific events and if there is a claim to be made by some party.

Wrongful death claims are complex and take time and expertise not just in proving liability of one party or another, but also in determining what damages may be recoverable.

The award-winning car accident attorneys at Davis Law Group are experienced not only in car accidents in general, but have specific track records of success handling wrongful death cases as well as cases involving semi trucks.

If you or a loved one were hurt in an accident, Davis Law Group offers free case evaluations and Washington accident law books.

To request a free case evaluation with Davis Law Group call 206-727-4000 or use the chat or contact links on this page.