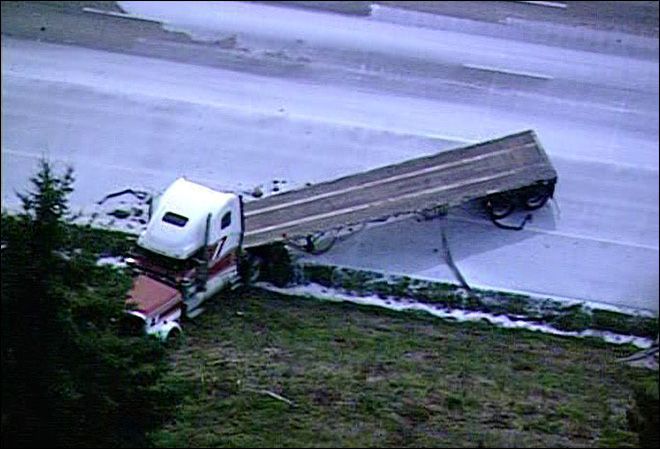 A woman was critically injured Wednesday evening after a semi truck crashed into her minivan on Interstate 5 near Federal Way. The semi truck accident caused a significant backup for freeway traffic in the area that lasted a few hours.

Police reports indicate a 56-year-old woman was driving her minivan northbound on I-5 just before 7 p.m. when the vehicle broke down. The woman called police to let them know that she was in a disabled vehicle in the middle of the freeway but a semi truck crashed into her before Washington State Patrol (WSP) troopers could arrive at the scene.

The semi truck was apparently carrying more than 20,000 pounds of resin glue, which added a significant amount of weight to the already-massive vehicle. That weight likely made the semi truck collision even more violent, which left the woman with critical injuries.

The woman was transported to Harborview Medical Center in Seattle to be treated for her injuries. There were no additional details available regarding her status at the hospital.

Semi trucks can easily weigh up to 20,000 pounds on their own without a heavy load. The fact that this particular semi truck was carrying 20,000 pounds in freight alone makes the potential for destruction even greater and is likely a contributing factor to the extent of this innocent woman's injuries.

This semi truck accident comes shortly after the Washington State Patrol in March issued a warning to drivers throughout the state about semi truck accidents and how a significant percentage of them are caused by passenger vehicles.

In that news release, the WSP announced that troopers would be riding with various truck drivers and report reckless drivers to police on the road, who would then issue tickets to those drivers.