Semi Crashes into Barrier on I-5 Curve in Tacoma 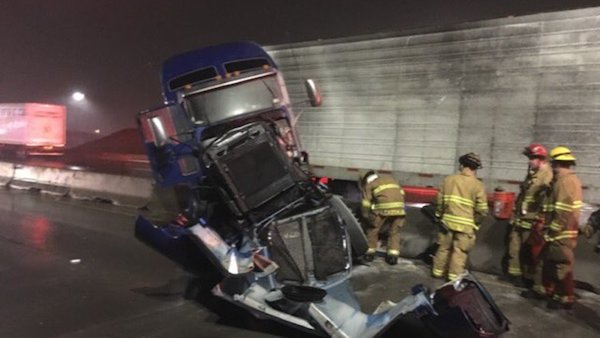 A semi truck crashed into a barrier on Interstate 5 in Tacoma early Wednesday morning, bringing traffic to a halt.

The truck crashed into the center barrier, blocking all lanes of traffic in both directions. The closure lasted for several hours as crews worked to clean up the 120 gallons of fuel on the roadway.

WSP says the causing semi truck driver was cited for negligent driving, which carries a $550 fine.

Another Semi Crash on I-5 Curve

The stretch of I-5 where Wednesday morning’s trucking accident occurred has become extremely problematic.

In fact, it’s the sixth semi truck crash in the general area since late September. All of the collisions have happened late at night or early in the morning, the most recent being a January 17 crash.

"This happens all the time; this ain't nothing new," said a woman who lives near the stretch of freeway. "There's always crashes over here. This is ridiculous, and then we deal with the sirens and the lights.”

Among the other bad collisions in this area: