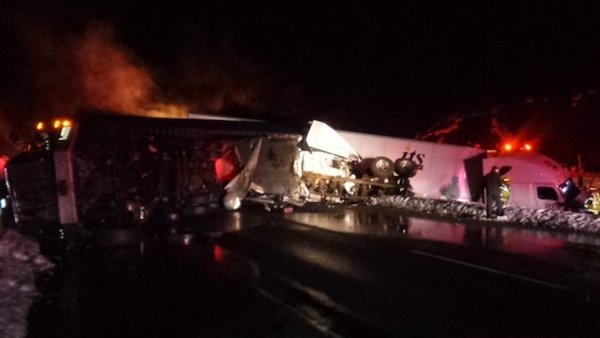 One person has been killed among several severe crashes on Interstate 90 along Snoqualmie Pass, according to the Washington State Patrol.

Police say there were six separate semi-truck accidents at milepost 62 on westbound I-90. There was also a fatal eastbound collision at milepost 61 involving four semi trucks and a car. There is no word if anyone else was injured in any of the crashes.

"Unfortunately, a lot of ice and we had collisions on both sides of the roadway in that area," Bryant told KOMONews. "Westbound around milepost 62 we had a bunch of individual collisions — semis and passenger cars sliding off the roadway, losing traction, causing a mess. Eastbound we had a bigger problem...we had one big collision scene involving four semis and one vehicle, and one of the semis rolled over."

Temperatures were in the mid-30s overnight with mostly rain. When the temperature dropped to 32 degrees early Friday morning, ice formed on the roadway.

There is a 32-mile stretch of I-90 between the summit of Snoqualmie Pass and the Indian John Hill rest area east of Cle Elum that is known as the I-90 Danger Zone due to the number of motor vehicle collisions and fatalities. The section stretches from I-90 milepost 47, just west of the Kittitas County line, to milepost 110, where Interstate 82 splits off.

If you or a loved one has been seriously injured in an accident near Snoqualmie Pass, contact attorney Chris Davis and the team at Davis Law Group at (206) 727-4000 to schedule your free legal consultation.