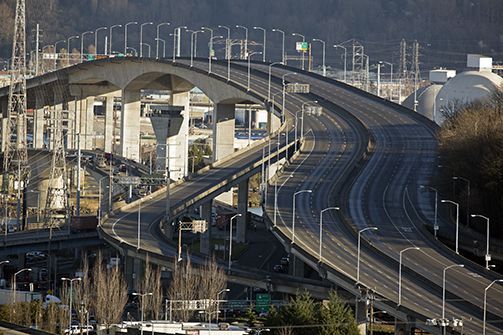 Seattle Department of Transportation (SDOT) officials announced on Tuesday that state employees responsible for de-icing Seattle roadways mistakenly applied twice the appropriate amount of de-icer on the West Seattle Bridge on Monday, adding that the mistake likely contributed to multiple car accidents on the bridge that day.

Steve Pratt, who operates as the Director of Street Maintenance for SDOT, said that street crews made the decision to apply de-icer to the West Seattle Bridge on the morning of December 2 because weather forecasts suggested hail or sleet in the early afternoon, followed by freezing temperatures throughout the evening.

According to Pratt, SDOT hoped applying the de-icer would be a preventative measure and improve the conditions of the road for drivers throughout the day and night.

“We thought in order to get ahead of that [bad weather], based on prior experience, we would get [the West Seattle Bridge] treated,” Pratt said, adding that the bridge surface was 38 degrees at the time crews began preparing to de-ice it.

Unfortunately, the SDOT crew mistakenly applied twice as much de-icer as was appropriate. Temperatures throughout that particular day were also much warmer than what was forecasted ahead of time, and the combination of these two factors created an extremely slippery surface for drivers. At least three accidents were reported near the area that was de-iced, and a Seattle Police Department (SPD) spokesperson indicated that there were several additional crashes that were not reported.

Clearly, the SDOT crew had good intentions in this situation, as the decision to treat the West Seattle Bridge with de-icer was meant to improve the traction of the roadway and reduce any chances of drivers being involved in an accident.

At the same time, however, drivers who use these roadways on a daily basis trust government agencies such as SDOT to ensure that the roads are safe to drive on. It may seem like a harmless mistake, but the reality is that numerous people suffered injuries or damaged property as a result of the slick roadway.

It is likely that anyone who was involved in a motor vehicle collision because of SDOT’s negligence would be able to file a claim with the city to recover compensation for any medical bills or property damage. Because SDOT has admitted to the mistake, it would seem that they may be prepared to take on the financial responsibility of helping victims recover from the losses they suffered.