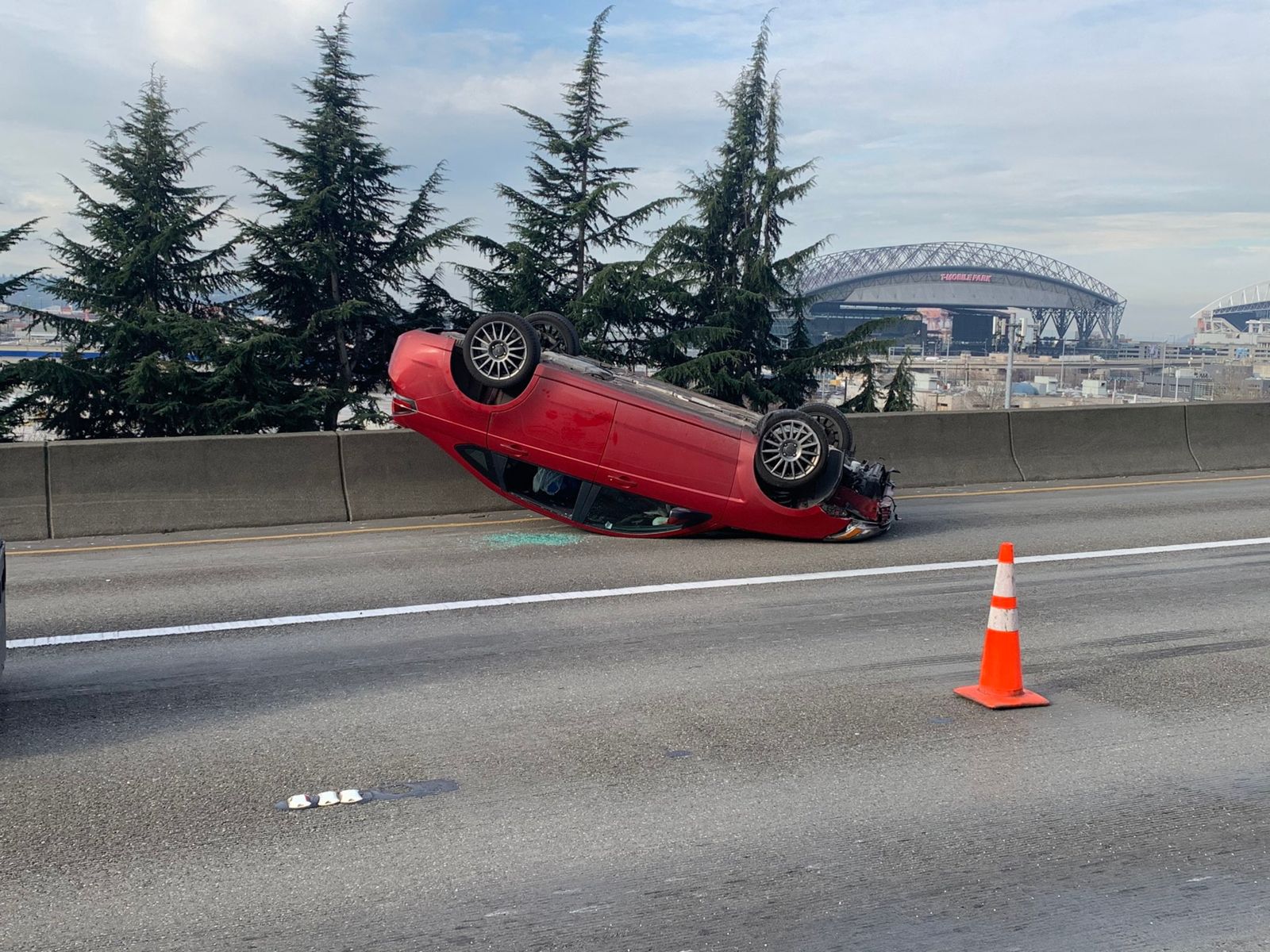 Four people were injured by a drunk-driver in a rollover accident on I-5 Wednesday.

The collision shut down multiple lanes of I-5 just south of the I-90 ramps for hours as State Patrol troopers conducted their investigation.

According to state troopers, an SUV driver was attempting to change lanes when it struck one vehicle and sideswiped another causing the SUV and the first car struck to roll.

Here are pictures from the scene on I-5. Vehicles are rolled over on both sides of the freeway. Again, this will be blocking for a while as WSP investigates. I will update with a reopening time when the detectives arrive. pic.twitter.com/bHZFmbbPlA

According to state troopers, an SUV driver was attempting to change lanes when it struck one vehicle and sideswiped another causing the SUV and the first car struck to roll.

The drivers of the SUV as well as the first vehicle struck were both seriously hurt and state troopers are considering the crash as potentially a case of vehicular assault.

While both drunk driving collisions and vehicular assault collisions involve a potential crime being committed by the at-fault driver the distinction between the two can be very important for a victim.

Drunk driving collisions involve a driver getting behind the wheel of a vehicle while intoxicated, putting their life and the lives of those around them in danger. While there is no such thing as a drunk driving accident, the choice to drive drunk and endanger others on the road is legally different than the choice to intentionally attack or injure someone.

If a driver is found to have intentionally crashed their vehicle, with the purpose in mind to harm an individual, their victim may not have the same claim to recovery from that driver's insurance company as they would from any other type of collision.

Insurance companies provide language in their contracts that protect them from liability from "intentional acts" meaning that even if an at fault driver carried millions in coverage, their insurance company can reject any claim made against that policy if the driver's actions were intentional.

This financial out for an insurance company could leave assault or road rage victims high and dry with little to no recourse if an at-fault driver does not have the personal assets to pay for the damages they caused, and most do not.

Thankfully, in certain circumstances where the intentional act is carried out by a drunk driver, it is much harder for the insurance company to escape liability.

The recovery process for someone who was hurt in any kind of crash is complicated enough, but the legal questions raised by crashes like this make it all the more important for a victim to have the best team on their side.

If you or a loved one have been injured in an accident like this Davis Law Group offering free case evaluations for accident victims and their loved ones to help start the recovery process on the right foot.

You can request your free case evaluation with the award-winning team of car accident attorneys at Davis Law Group today by calling 206-727-4000 or using the chat or contact options on this page 24-hours a day, 7-days a week.