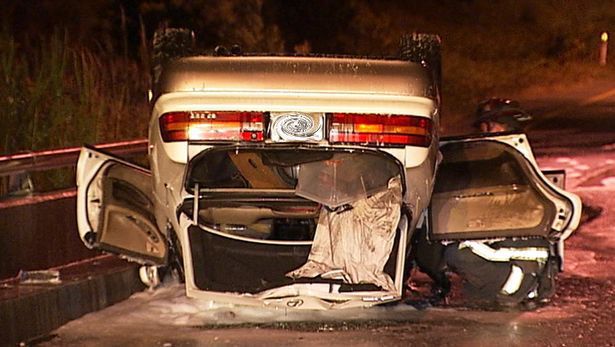 A driver and her passenger were both injured and hospitalized following a rollover car accident on Interstate 5 in Seattle Friday evening. Drugs or alcohol may have been a factor.

According to the Sky Valley Chronicle, 40-year-old Amber Evans of Greer, South Carolina was driving northbound on I-5 just after 9:30 p.m. Friday when she lost control of her vehicle. Officials say she was likely traveling at a high rate of speed when she struck a concrete jersey barrier on the side of the interstate.

The collision sent Greer’s vehicle spiraling out of control. It rolled several times, finally landing on its roof. The vehicle was badly damaged and the police report indicates it was declared a total loss.

The police report also says that Greer and her 32-year-old passenger, Shelton Alexander of Tukwila, were injured as a result of the crash and taken to Harborview Medical Center in Seattle for treatment of undisclosed injuries.

The story from the Sky Valley Chronicle says the Washington State Patrol investigators believe that drugs and/or alcohol may have played a role in causing Friday’s rollover collision. The article did not indicate what led troopers to this conclusion, or whether or not Greer was given a blood-alcohol test.

In general, accident victims will typically have a very limited understanding of their legal rights after being hurt due to someone else’s negligence. This is particularly true in situations where a drunk driver is involved, especially when an injured party may have been riding with a drunk or drug-impaired driver.

Get Legal Help After An Accident

Passengers who are injured by a drunk driver will typically be able to pursue a claim for damages against the at-fault driver’s insurance company. Many people in these situations do not realize that they have legal rights and suffer the financial hardship of dealing with mounting medical bills and lost wages when they could likely pursue a personal injury claim to be reimbursed for those damages.

It is always important to consult with an attorney about your legal rights after an accident, regardless of what you think your rights may be. Luckily enough most personal injury attorneys offer free legal consultations. Call the personal injury lawyers at Davis Law Group in Seattle at (206) 727-4000 or use the confidential contact form on this page to request a free legal consultation with our award-winning legal team.