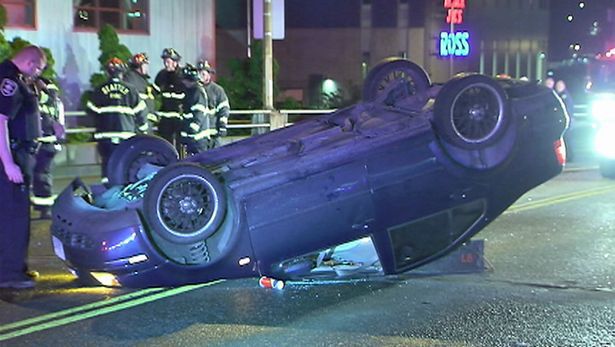 A woman was hospitalized early Wednesday morning after she lost control of her vehicle, which rolled several times before coming to a crashing halt on the Ballard Bridge.

According to KIRO News, the 47-year-old woman was driving her Volkswagen Jetta northbound on the Ballard Bridge just after 1:30 a.m. Wednesday. Investigators believe she somehow lost control of her vehicle, causing it to flip over before eventually resting upside-down on its roof.

When emergency crews arrived at the scene, they found the woman trapped inside of the car, as she was still strapped into the driver’s seat. Firefighters had to carefully remove the woman from the vehicle through the driver’s-side window.

Police Unsure About Cause of Crash

Officials told KIRO that the woman was still awake and alert when medics first reached the scene, but that she apparently lost consciousness on the way to the hospital. She was transported to Harborview Medical Center to be treated for multiple undisclosed injuries, and it was unclear whether her condition had improved after being hospitalized.

Police were investigating the scene in order to figure out how fast the woman was going at the time of the crash, as well as to determine if there could be any other possible contributing factors to the incident. The speed limit at this particular span of the Ballard Bridge is reportedly 30 mph.

Witnesses told KIRO that speeding is a problem on this section of the bridge, and that police have been more frequently patrolling the area on the lookout for speeders.

If you have been injured in a car accident, contact Davis Law Group.