Roadway Debris May Be Cause of Fatal Car Pileup, Claiming 5 Lives 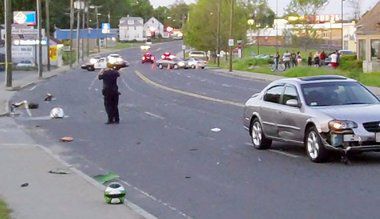 A six car pileup was possibly caused by a ladder on the interstate that took five lives. Another driver also reported that there was a large bag, a lawn chair and a sofa, just minutes before the fatal accident. Many people on Facebook complained of the items in the road.

Earlier before the crash, another woman says she hit some of the item and pulled over to call the police.

"They told me they knew about it for a while," Fisher said. "I didn't even have to tell them what it was. They already knew. They said, 'Oh, is that stuff still out there?' And that's all they said."

Officers walked the highway after the accident trying to gain more evidence concerning the fatal accident, in order to determine if the debris was actually to blame.

"The debris on the road, a broke down vehicle and the other accident were approximately, I would say two, two and half miles towards the area," an officer said.

It was confirmed that someone did report the debris prior to the accident.

"I know Highway Patrol responded, along with myself and another officer, to try and clear these problems."

The complete cause of the pileup is still unknown.

"We are still trying to locate more witness," he said. "Everything from determining speeds of vehicles, impacts to time, skid marks. There is a lot of detail involved in on this."

The many details could make this a long investigation in order to determine what truly happened.

The question stands, that if the roadway debris was reported to police and they did nothing about it, they could be liable for the fatal accident. Roadway debris causes many accidents every day.

If you have been injured in an accident caused by debris on the roadway, contact Seattle personal injury attorney Chris Davis at (206) 727-4000 to schedule a free consultation today.