Report: Amtrak Cascades Crash Engineer May Have Been Distracted 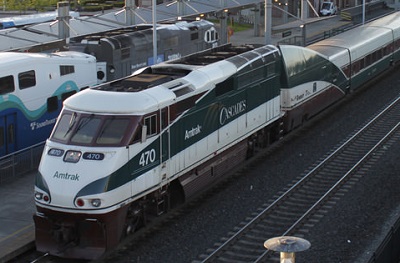 Investigators are looking into whether the Amtrak Cascades train engineer was distracted prior to the December 18th derailment in DuPont, a federal official told the Associated Press.

The official told the AP that the National Transportation Safety Board investigators want to know if the engineer lost “situational awareness” because of an employee-in-training that was present in the cab at the time of the derailment.

The Dec. 18 Amtrak Cascades derailment resulted in the death of three people and over 70 injuries. The train was traveling at 80 miles per hour around a 30 mph curve over Interstate 5. Five cars and two semi-trucks were also involved in the incident.

Radio transmissions from a crew member described the engineer – whose name has not been released at this time – as bleeding from the head after the derailment. Both eyes were swollen shut as well. The radio transmission also referred to a second person in the cab who was also injured.

The Amtrak Cascades train was making its inaugural trip along a new, faster bypass that included refurbished tracks along I-5.

A May 2015 derailment of an Amtrak train in Philadelphia – which resulted in eight deaths and more than 180 injured passengers – was caused by a loss of situational awareness by the train’s engineer after his attention was diverted to an emergency involving another train. That Amtrak train was traveling 106 mph around a curve with a speed limit of 50 mph.

Situational awareness is being aware of one's surroundings and identifying potential threats and dangerous situations. No amount of experience can make up for a loss of situational awareness. It can only be exercised with the will and discipline to do so.

Injured In The Amtrak Accident?

The laws that govern liability in a train accident can be extremely complex. Because of various regulatory intricacies, such cases require law firms with extensive resources and experience. The victim may need a train derailment accident attorney that thoroughly understands the interactions between Washington State and federal law. The attorneys at Davis Law Group, P.S., have extensive experience in both state law and federal regulations that govern different mass transit accidents.

Regardless of the cause or type of rail accident you have been involved in, the laws governing railroad disasters can be very complex and may vary greatly depending upon the circumstances of the accident. Attorney Chris Davis and his experienced legal staff will protect your rights and diligently pursue the compensation you deserve no matter your circumstances.

If you or a loved one has been injured, or if you have lost a loved one due to a catastrophic train accident, call the team of Amtrak derailment lawyers at at Davis Law Group at (206) 727-4000, use the chat feature below or fill out the form on this page.