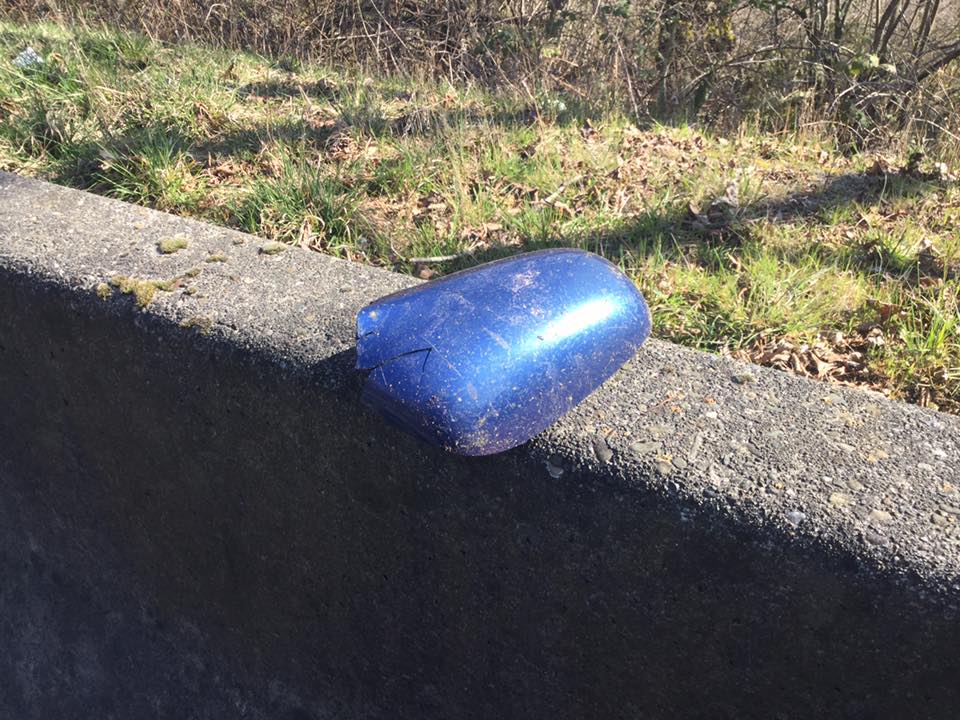 UPDATE: The Renton Police Department says the vehicle in question was reported and located on Monday and the driver was taken into custody, pending charges.

Final update (3/20) Renton Reg Fire Authority FF's saw a vehicle matching the description & called it in. It was the suspect vehicle. Suspect taken into custody & booked for Invest of Felony Hit & Run. Victim is stable w/serious injuries. Thank you all for the help & sharing/sh

Police in Renton are looking for what they believe is a navy blue Saab sedan after a hit-and-run driver fled the scene of a major-injury pedestrian accident Friday.

Police and medics responded to the scene of 2100 Sunset Boulevard in Renton – the location of the Sunset View Apartments – after receiving reports of a pedestrian with life-threatening injuries just after 3 p.m. Friday. Witnesses reported that the pedestrian was struck by a blue sedan which quickly fled the scene.

A side mirror belonging to the hit-and-run vehicle was torn off by the impact of the collision and left behind at the scene. Police say this valuable clue may lead them to the suspect, though the public’s help is needed to assist in tracking down the vehicle, which remained at large on Monday.

Officials told news reporters that the vehicle in question is also believed to have front and passenger side damage. The eastbound lanes of Sunset Boulevard were closed while investigators collected evidence and interviewed witnesses.

Anyone with information about Friday’s accident is asked to call Detective Hyett with the Renton Police Department at (425) 430-7556 or [email protected].

Legal Issues And Liability For A Hit-And-Run Crash

Determining fault for any accident involving a motor vehicle is often a complex process which requires a thorough investigation and analysis of all potential contributing factors. While that may still be true, the weight tends to shift in one particular direction when a driver flees the scene of a collision.

There may be a myriad of reasons for someone’s decision to leave the scene of a pedestrian accident. The at-fault driver may have been driving without a license or insurance, or they may have been under the influence of intoxicating drugs or alcohol at the time. While we may never know this driver’s reason for fleeing the scene, the fact remains that this decision increased the chances that they are held legally liable for the pedestrian’s injuries.

The fact that the pedestrian reportedly suffered “life-threatening injuries” in the collision only makes matters worse for the hit-and-run driver. Not only are the victim’s damages likely to be on the higher side, but the driver may also face serious criminal consequences should the police ever locate them. And given that the driver left physical evidence behind at the scene, it is likely only a matter of time before they are located.

Attorney Chris Davis of the Davis Law Group in Seattle authored a free educational legal guide on pedestrian accident law, titled “Right Of Way: The Essential Guide To Pedestrian Accident Law in Washington State” which is designed to educate accident victims about the personal injury legal process and the common mistakes to avoid.

If you have been injured in an accident it is likely in your best interests to consult with a qualified personal injury attorney who has experience handling cases similar to yours.

Davis Law Group offers free legal consultations for accident victims and their loved ones and our team is standing by to speak with you about your legal rights and help you make the right legal decisions for your financial future. Call our office in Seattle at (206) 727-4000 to request a complimentary case review today.