Red light cameras have been in use in the United States since the early 1990s, but they've been used throughout the world as early as the 1960s. The cameras were developed following a number of highly publicized hit-and-run accidents that resulted in serious injuries, namely to young children. This innovative technology has received both cheers and jeers from the public, and the debate about their effectiveness and constitutionality continues. 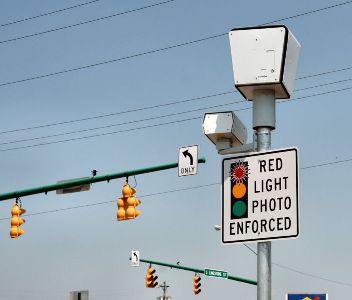 Red light cameras were first developed and produced in the Netherlands. Lacking the motion-sensing technology used in today’s devices, the first system used sensor tubes to stretch across the roadway which would alert the camera of someone passing through an intersection after the light had turned red.

In 1982, a traffic collision involving a car that ran a red light and struck a stroller carrying an 18-month-old child garnered national attention and prompted the research into possibilities of an automated camera system. The first of these devices went into effect in New York City in 1993, when digital recording was nonexistent. Film from the cameras was delivered to the police for review.

The United States wasn’t the only country to take note of the potential benefits that could come from capturing these seemingly petty offenses on the red light cameras. The cameras began showing up all over the world shortly after their introduction in the Netherlands, and they allowed police personnel to focus their efforts on patrolling and investigating crimes while the cameras took care of writing up fines for the offenders.

The backlash against the adoption of the cameras is fierce. Many proponents of the technology argued that the cameras were unconstitutional, and some adopters even established laws limiting what the video evidence could be used for in order to curb worries about them being used for illegal public surveillance.

Counter-arguments submit the cameras cause people to rush through intersections to avoid being ticketed or slam on their brakes at the last second. Others claim that the cameras were just a ploy for police departments to collect revenue based on technicalities. One supporting example of this is the New Jersey woman who ran a red light by one-fifth of a second and received a ticket in the mail.

The manufacturers of the red light cameras are among the first to defend the effectiveness of the technology. According to American Traffic Solutions (ATS), one of the leading producers of the product, red light violations have decreased by 47 percent in Roselle Park, New Jersey, where they were introduced in 2011.

What do you think about the use of red light cameras as a deterrence measure? If you have been injured in an accident through no fault of your own, contact the award-winning personal injury lawyers at Davis Law Group by calling (206) 727-4000 today.