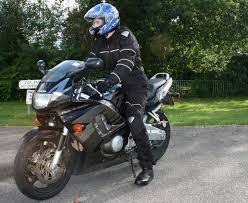 Motorcyclists are at a great disadvantage when it comes to being involved in a traffic accident. A rider's risk of injury and/or death is as much as 30 times higher than the average motorist in the event of a crash. This can be attributed to the fact that motorcycles do not provide physical protection to occupants in the event of a collision, as well as the number of riders who do not have an official motorcycle endorsement or those who do not wear helmets while riding.

For motorists who drive a passenger vehicle – meaning they are in an enclosed space and are physically protected by the walls of the vehicle – the risk of injury and/or death is much lower. However, nearly every state in the country still requires motorists wear some form of safety restraint while operating a vehicle. (New Hampshire does not have a mandatory safety belt law.)

Since motorcyclists are at an inherently higher risk of serious injury or death, it would only be logical that states would also enact laws requiring them to wear a helmet in order to avoid the carnage that results from motorcycle accidents. 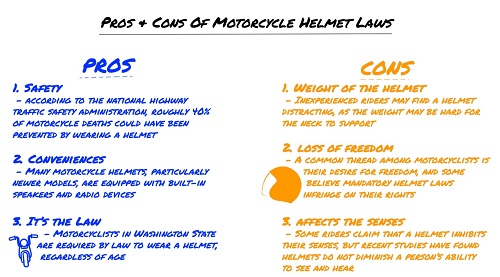 Click on the image above to open a high-resolution version in a new tab!

“We are 100 percent pro-helmet, and 100 percent anti-helmet law,” says Jeff Hennie of the Motorcycle Riders Foundation. “Putting a helmet law in place does not reduce motorcycle fatalities. Educating other motorists to look out for motorcyclists, and teaching motorcyclists how to ride safely, is the ultimate solution for saving lives.”

While education about sharing the roadway and proper safety techniques is a good place to start, the enforcement and regulation of Hennie’s approach leaves a lot to be desired. The statistical evidence surrounding the benefits of helmet use in motorcycle accidents is undeniable, as expressed by Jackie Gillan, president of the Advocates for Highway and Auto Safety.

“Education is not a substitute for wearing a helmet,” says Gillan. “It’s like saying if you take a driver’s [education] class, you don’t have to wear your seat belt. Now how silly is that?”

Gillan also says that if we are going to enforce helmet laws for motorcyclists at all then they have to be mandatory for all riders, not age-dependent.

“Partial helmet laws are difficult to enforce because it’s hard for police to tell the age of motorcyclists as they go whizzing by,” she added.

2 Comments
Bigger D.O.T. approved helmets create more fatifue,less peripheral vision, less hearing ability, more torque on tour neck in glancing impact twisting your head,and nanufactuers only warranty them for impacts under 15 mph or they threatened not to manufacture them at all years ago.I was personally involved in a incident where if I did not have a less restrictive helmet on I would not have heard a car lock up his brakes at stop light with sun in our eyes,but because I did hear it i was able to let my clutch out jumping forward avoiding serious damage to me and my bike mom
by Jim G December 8, 2017 at 12:50 AM
cool
by jerry February 12, 2016 at 03:15 PM
Post a Comment