Priest in Hot Water after DUI, Weapons Arrest in Alaska 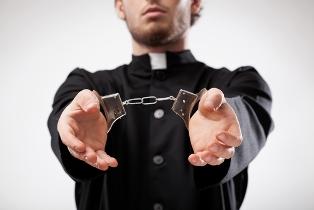 This news story has us wondering if the sacramental wine is a little bit stronger in Alaska than it is here in Washington.

Police officials in McKinley Village, Alaska say that a 52-year-old Roman Catholic priest was arrested on Monday, March 24 on charges of DUI, marijuana possession and firearms possession after officers witnessed him driving erratically.

According to the Anchorage Daily News, 52-year-old Father Sean P. Thomson was stopped by trooper Christopher Bitz after the officer observed Thomson’s 2002 GMC Sierra swerving. Bitz recorded the vehicle at 79 mph in a 65 mph zone, and immediately initiated a stop of the vehicle.

Trooper Bitz said that Thomson appeared disoriented and when asked for his vehicle registration, the priest mistakenly handed the officer a receipt instead. And although Thomson admitted to having a .357 pistol in the back seat when Bitz asked him if he was carrying any weapons, he neglected to mention the 9mm handgun that was in his back pocket at the time.

The priest also failed to mention that there was a small quantity of marijuana in the pocket of his sweatshirt, according to a statement provided by Bitz regarding the arrest.

At the scene of the arrest, Thomson registered a .247 blood alcohol content on a handheld breathalyzer. Once Thomson arrived at the police station, officers attempted to give the priest a more accurate test using a Datamaster machine, but Thomson declined, saying “he was drunk and did not feel the test was necessary,” according to troopers.

In all, Thomson was charged with DUI and refusing to submit to a chemical alcohol examination, drugs misconduct, and two counts of weapons misconduct. Thomson reportedly faces the weapons charges because in the state of Alaska, drivers are required to alert troopers if they are carrying a firearm and also because it is illegal to possess a firearm while intoxicated.

The state of Alaska was one of the first states in the U.S. to legalize marijuana, which means there is a chance that Thomson could be cleared of the drug charges. However, the fact that he was obviously extremely impaired at the time of his arrest does not bode well for his chances, and he is lucky to have been caught before he caused a drunk driving collision.