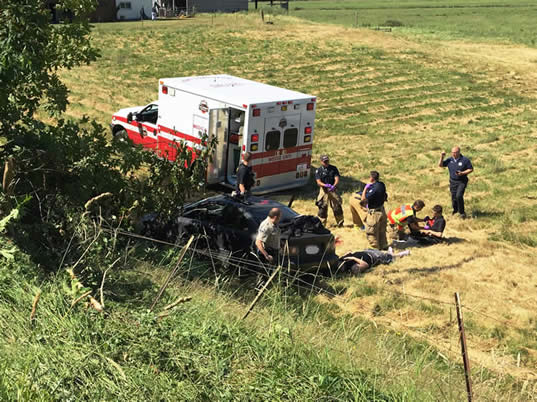 Two adult passengers were transported to Harborview Medical Center for treatment of serious injuries resulting from a car accident they were involved in Thursday morning in Port Townsend.

According to a press release from East Jefferson Fire Rescue, a gray Honda sedan was traveling southbound on Center Road near Milepost 1 at approximately 10:30 a.m. Thursday when the driver lost control of the vehicle. The Honda drifted to the edge of the road before going down a steep embankment and striking a tree, rolling several times before coming to rest upright.

The release indicates that all three occupants had exited the vehicle before first-responders arrived at the scene. The driver reportedly suffered minor injuries, while a 25-year-old man and 21-year-old woman from Chimacum were airlifted to Harborview with serious chest and head injuries.

The Jefferson County Sheriff’s office is reportedly investigating the circumstances leading up to the collision. There was no additional information regarding any potential criminal charges.

Passengers Injured in Crashes Caused By Their Driver

When a passenger is injured in a collision that was caused by the driver they were riding with, often the only recourse for the victim is to file a claim against the driver. Since it is likely that a passenger will already have some sort of personal relationship with the driver they would be pursuing a claim against, this can sometimes be a difficult and adversarial process that puts a strain on personal relationships.

At Davis Law Group, this is a situation our personal injury lawyers run into frequently. It’s frankly no fun for plaintiffs in a personal injury case to be at odds with someone they care about on a personal level. However, we are often able to help alleviate some of this tension and explain to our clients that this is simply how the legal process works, and that they deserve to be compensated for their injuries and other damages.

For injured passengers struggling with this issue, it’s important to communicate to the at-fault driver that the purpose of pursuing a claim is to get your medical bills and other losses covered by the insurance company, rather than assigning blame or holding a grudge over the cause of the collision.