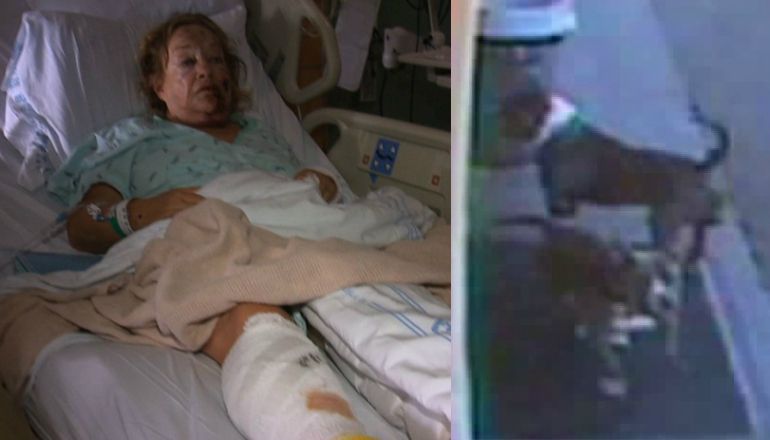 Tribal police in Puyallup are searching for the owners of two pit bulls involved in a vicious dog attack Friday afternoon that left an innocent woman with serious injuries and a long road to recovery.

According to Q13 Fox, police are sharing video surveillance footage with the public in hopes of identifying the dangerous dogs and bringing justice to the victim, Donna Berto. Berto was visiting a convenience store in Pierce County with a friend on Friday afternoon when she noticed two strange dogs approaching her.

The owner of the convenience store and his employees tried to help Berto escape the attack, but the dogs were hardly phased by their attempts. Eventually, one of the employees fired a gun into the air, which scared the dogs away from the scene. But the attack left Berto with a number of serious injuries to her face, hands, and other parts of her body that will require extensive medical treatment.

“These dogs were obviously trained to be mean, these weren’t your average nice dogs,” said William Manzaneres, the owner of the convenience store.

Berto’s family and friends are working with tribal police to spread the word about the brutal attack in hopes of locating the dogs and their owners. Police have released a set of still-frame images taken from a surveillance camera that shows the dogs outside of the store moments before the attack occurred.

Berto has since been discharged from the hospital, but due to the extent of her injuries will likely be left with expensive medical bills for the treatment she has received and will require in the future. If you or anyone you know has any information about the dogs’ owners, please call Crime Stoppers at 1-800-222-TIPS.