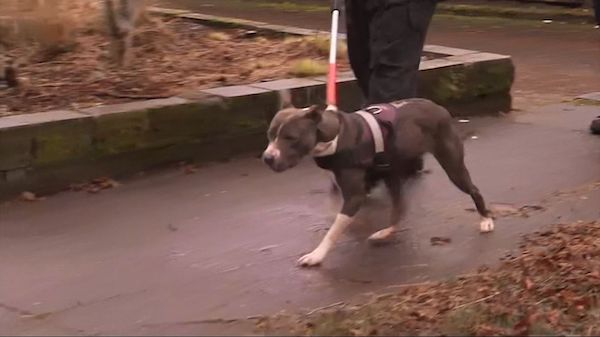 An escaped pit bull attacked students at a school in the Madrona neighborhood of Seattle last week, leaving multiple children with bite injuries, according to Seattle Police.

The incident occurred around 10:40 a.m. on December 13 at St. Therese Catholic Academy, an elementary and middle school located at 900 35th Avenue.

Seattle Police say two dogs got loose from a nearby home and entered the school grounds as a group of third graders were leaving recess. One 8-year-old girl was jumped by the dog. She was bitten on her head and hand and spent much of the day at Seattle Children’s Hospital receiving treatment. Two other students also received several bites.

A school staff member heard the commotion and was able to separate the dogs from the children. All three students are expected to be OK.

The school’s principal told KIRO7 the dogs were in a cage but got loose when someone opened up the home’s garage.

Seattle Police say the dogs returned home and animal control officers from the Seattle Animal Shelter later took the dogs into custody. Animal control will conduct the follow up investigation.

It’s unclear if the owner of the dogs will face any charges.

For the past 25 years, attorney Chris Davis and the legal team at Davis Law Group have been protecting the rights of pit bull and animal attack victims in Washington state. These cases have resulted in settlements that help victims pay for medical bills, missed work, and the emotional trauma that goes along with these senseless events.

Below are just a few of the many personal injury and wrongful death settlements, arbitration awards, and jury verdicts that have been successfully resolved by the award-winning attorneys at Davis Law Group.

We believe that every successful dog bite recovery starts with the injured victim having up-to-date and accurate information about the legal process. Mr. Davis provided much of this information for free and we encourage you to read our book, When the Dog Bites: The Essential Guide to Dog Bite Claims in Washington, and to browse our website to find out more information about dog bites and the insurance process.

If you or a loved one has suffered serious injuries from a dog bite or animal attack in Washington state, contact the Seattle dog bite attorneys at Davis Law Group today for a free case evaluation. We can be reached at (206) 727-4000, by using the chat feature below or filling out the contact form on this page.

Location of the Attack

Attorney Chris Davis in the News

Attorney Chris Davis is regularly featured on local and national news to discuss recent dog bite cases. The above video reel is a selection of those appearances.

According to the American Humane Association:

Experts believe that a child’s smaller stature and generally more erratic behavior are contributing factors to the above statistics. In cases of dangerous pit bulls and other aggressive breeds, a child’s energy and behavior may be more likely to trigger a dog’s prey drive.