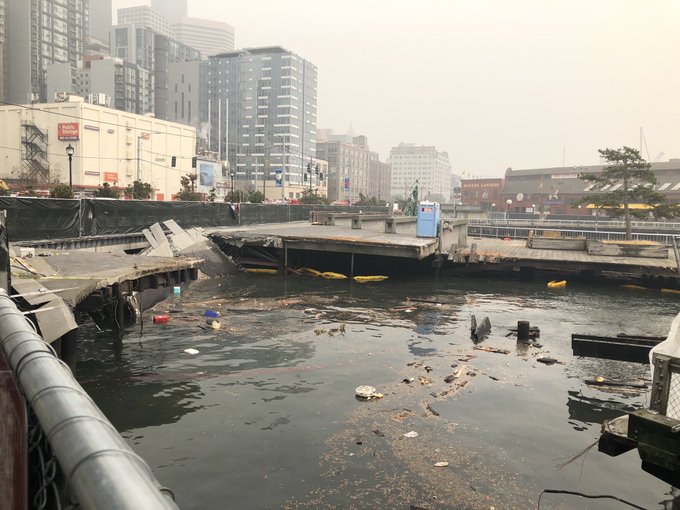 Two members of a construction crew working on Seattle's famous pier 58 were hospitalized after a section of the pier collapsed Sunday.

Seven workers in total were on the pier at the time of the collapse Sunday afternoon when an estimated 20% of the pier disappeared into the water, taking a 30-year-old and a 42-year-old worker with it.

The workers were wearing flotation devices which assisted other crew members in their efforts to rescue the two from the water.

Both workers who fell in the water were taken to Harborview medical center where one was released later Sunday night, the other is still held in satisfactory condition.

At this time officials do not believe that the collapse was caused by the crew or their work.

Workers Rights After A Jobsite Accident

Workers injured on the job in Washington State can have limited opportunities for recovery due to restrictions from the Washington State Department of Labor and Industries also known as L&I.

Whenever an accident takes place while on-the-job the injury claim is going to be handled by L&I and are different than a typical third party injury claim process.

In this case, however, it is possible that workers were contracted by the city, making a third-party claim for negligence a possibility.

Thankfully it appears that neither worker sustained significant life-threatening injuries from the accident, but even soft tissue injuries like sprains and strains can be enough to rack up significant medical bills and keep someone out of work for months as they recover.

Accident victims have the right to claim a recovery for everything from medical bills to out of pocket expenses that came as a result of the accident.

If you or a loved one have been injured in any kind of accident, get the award-winning team of personal injury attorneys at Davis Law Group on your side by requesting  a free case evaluation.

Call 206-727-4000 or use the chat or contact option on this page to request your case evaluation today.