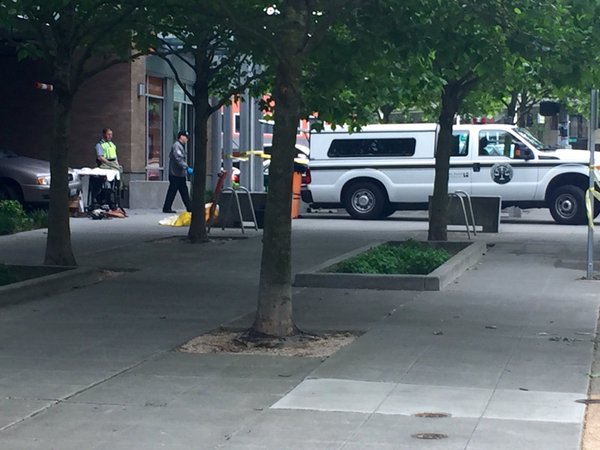 The King County Medical Examiner at the scene of the accident. Image source: KIRO News

A car struck and killed a man while pulling out of a parking lot near Seattle’s Space Needle yesterday morning. The accident occurred at around 6:40 a.m. at Taylor Avenue and Denny Way. The driving was pulling out with his Toyota sedan when he heard a noise beneath his vehicle and came to a stop.

The driver called 911 and cooperated with police at the scene. A police drug recognition expert examined the driver and found no evidence of drug or alcohol impairment. An emergency crew was dispatched, but an attempted rescue using airbags to lift the vehicle could not save the man who was struck. He was pronounced dead at the scene.

Police are still investigating the facts of the accident. The place where the collision occurred is a narrow alley just off Taylor Street between two buildings; lighting and visibility can be poor in the area. Many homeless people sleep on nearby sidewalks. Police are investigating the possibility that the man who was struck and killed may have been asleep at the time of the collision.

A dangerous area with no easy solutions

The area surrounding the Space Needle sees high traffic from pedestrians and cars alike, and the consequences are sometimes disastrous. The intersection of Denny and Stewart streets, only a few blocks from Taylor, has one of the highest collision rates of any intersection in Seattle. Many nearby intersections and alleys are unmarked or do not have traffic or warning lights. Construction projects in the area have blocked off sidewalks or reduced the size of sidewalks.

As the police pointed out, many homeless people sleep in the area out of necessity. 15 of Seattle’s homeless shelters closed recently as rents skyrocketed, putting many of Seattle’s most vulnerable residents on the street. The city’s tentative plans to fence off high-crime areas like the Jungle, a homeless encampment within the East Duwamish Greenbelt, may put more homeless people on sidewalks near high-traffic areas at night.

Legal questions after a pedestrian accident

In both criminal and civil investigations, establishing the facts after a pedestrian accident can be difficult. While pedestrians have the right of way in most circumstances, a driver may not always be held liable or criminally responsible for an accident. An investigator may try to establish: