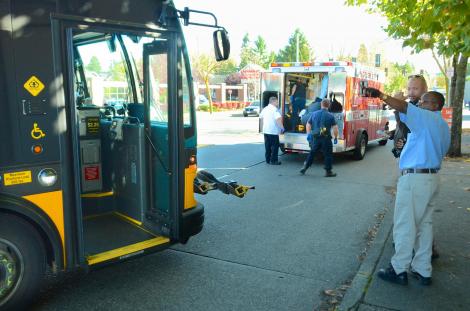 A pedestrian attempting to flag down a metro bus on Elliot Ave North was struck and killed after falling into the roadway.

Witnesses at the scene reportedly describe the pedestrian attempt to flag down the bus before falling in front of the bus in the street where the driver attempted to swerve but was unable to avoid the man.

Emergency responders pronounced the man dead at the scene and evaluated the driver for signs of impairment at the scene.

While there were no signs of impairment reported, investigators are continuing to work with Metro Transit and factors such as on board recordings will factor into their complete investigation.

Unfortunately, Davis Law Group knows all too well that one side effect of having an immense network of metro vehicles means that accidents, injuries and even deaths may come from it.

This accident may initially appear to be a mater of error on the part of the pedestrian, falling in the road in front of the bus, giving the driver little to no time to react and prevent the collision.

And while those facts may be the case, the ongoing investigation could turn up new information via the onboard camera, further witness interviews or even driver history.

Based purely on the description provided by initial reports of this accident one could point to several direct similarities between this incident, and the case of a Washington man who was struck and killed by a greyhound bus in Oregon resulting in a $20,000,000 settlement.

In that case a bus driver failed to check that all ticketed passengers had reboarded the bus after a stop and began to leave without a passenger. That passenger then attempted to chase and flag down the bus, before falling in front of a wheel and being killed.

In that case the pedestrian was assessed 10% contributory negligence with Greyhound being held 90% at fault for not following safety policies regarding passenger boarding.

It is impossible to know at this time if there were similar areas of misconduct on the part of the metro driver, or if there was truly anything that the driver could have done to prevent this tragic accident. At this time all we do know is that a life was lost and families have been deprived of their loved one and are waiting for answers.

Families should be looking to investigators for more information as they have it and keeping records of facts and reporting regarding the accident in the event that a wrongful death claim may become necessary.

If you or a loved one have been injured in a bus accident, the experienced bus accident attorneys at Davis Law Group are here to help with free case evaluations for accident victims.

To request your free case evaluation call 206-727-4000 or use the chat or contact us options on this page today.