UPDATE: Driver Found after Hit-and-Run with Pedestrian in Bellevue 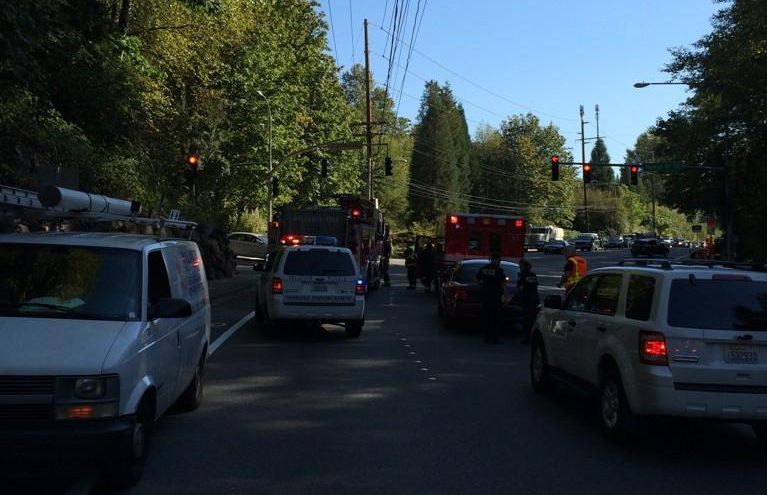 UPDATE 9/12/14: Investigators with the Bellevue Police Department said they have arrested the 58-year-old driver believed to be responsible for striking a 24-year-old pedestrian near Coal Creek Parkway in Bellevue and fleeing the scene.

The hit-and-run pedestrian collision, which occurred at approximately 3:30 p.m. Wednesday, was reportedly captured on nearby surveillance video. Police released still frames from the video to local news agencies in hopes that someone would recognize the vehicle and come forward with information that would help them identify the person responsible.

“She knew she hit something, but didn’t stop,” says Lt. Marcia Harnden of the Bellevue Police Department.

According to police, the suspect lived just up the hill from where the collision took place. The suspect’s daughter saw the surveillance images on a news broadcast and called police to report that the vehicle description matched that of her mother’s.

The woman was arrested on suspicion of felony hit-and-run. It’s unclear why she fled the scene of the collision.

ORIGINAL STORY: Police are looking for the female driver of a Porsche SUV who they say fled the scene after striking and seriously injuring a pedestrian in the Bellevue area Wednesday afternoon.

According to KIROTV.com, Officers say that the pedestrian was initially struck by a white van in a marked crosswalk on Coal Creek Parkway in Bellevue around 3:30 p.m. Wednesday. That driver pulled over and attempted to render aid to the injured pedestrian. Moments later, however, the driver of a dark Porsche Cayenne SUV ran over the woman a second time.

The driver of the Porsche SUV initially stopped for a moment, but witnesses saw her speed away northbound on Coal Creek Parkway. The entire incident was captured on nearby surveillance cameras, and investigators used the footage to inform the public of the hit-and-run driver.

The pedestrian, who has only been identified as a 24-year-old woman, reportedly suffered serious and life-threatening injuries – including multiple broken bones – and was taken to Harborview Medical Center to be treated. Police said the woman was conscious and expected to recover.

If you witnessed this collision and have any information that may help police find the at-fault driver, please contact the Bellevue Police Department at 425-452-6917.