A man with a skateboard darted into traffic and collided with an SUV at a busy Bellevue intersection Wednesday, and now police are looking for the suspect.

Traffic camera video from the intersection of 148th Avenue Northeast and Northeast 8th Street shows the man prepare to cross the street. He makes it across most of the street before being hit by a Tesla SUV.

According to police, the driver of the SUV stopped and told officers she was going about 35 miles per hour when the collision occurred. Police describe the man as a “juvenile” who was wearing a dark hooded sweatshirt and blue backpack.

People who frequently jaywalk think nothing of it, but the consequences can be serious. Jaywalking – crossing the street outside a marked or unmarked crosswalk – is convenient, but Washington State is tough on offenders. Pedestrians must not cross at any place except in a marked crosswalk (RCW 504-14-940 (4)).

According to Section 46.61.235 (2) of the Washington Administrative Code, “no pedestrian or bicycle shall suddenly leave a curb or other place of safety and walk, run, or otherwise move into the path of a vehicle which is so close that it is impossible for the driver to stop.”

In Seattle, jaywalking tickets carry a fine of $56. Police are unlikely to ticket offenders, creating a nonchalant attitude about these low-level violations.

If You’re Hit While Jaywalking In Washington State… 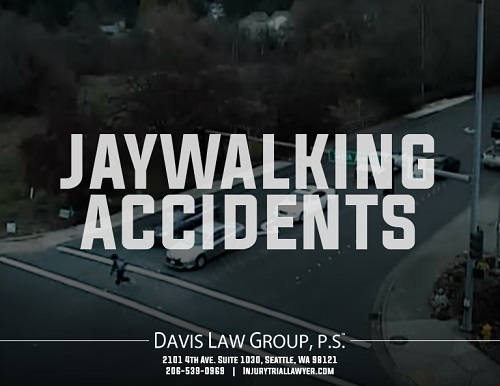 In the incident above, it appears likely that the jaywalker will not be able to pursue a personal injury claim against the driver that hit him. By darting into traffic with no regard for his well-being, it’s probably not expected that the driver of the SUV could’ve prevented the collision.

But in some cases, violators of jaywalking laws can get some damages from the driver that hit them. For example, if a jaywalker crossing the street was hit by a driver who was using excessive speed, was texting, or was under the influence of drugs or alcohol, some of the blame could be put on the driver.

Washington State uses the law of comparative negligence. This reduces the amount of damages that a pedestrian can recover in a negligence-based claim, based upon the degree to which the pedestrian’s own negligence contributed to cause the injury.

If you have been injured in a pedestrian accident, Davis Law Group, P.S., encourages you to reach out to us today for a free initial case evaluation by calling (206) 727-4000. You can also use the chat feature below or fill out the contact form on this page to get started. We will examine the circumstances of your case and inform you of your options for seeking compensation.