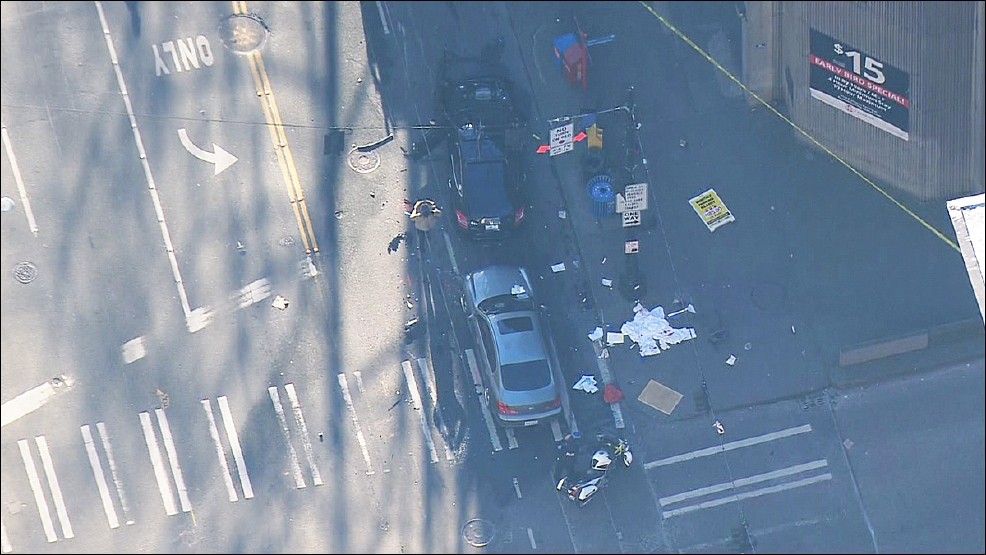 An aerial view of the scene. Image source: KOMO News

A pedestrian accident involving multiple vehicles stalled traffic during the morning commuting hours in Pioneer Square on Thursday. The crash happened shortly before 10 a.m. The incident occurred at the Columbia Street on-ramp; police closed off the area, preventing traffic from entering southbound State Route 99. First Avenue was closed between Cherry Street and Marion Street while emergency responders investigated the scene and cleared the vehicles from the roadway.

The incident began when a truck that was traveling southbound on 1st Avenue slammed into a car that was heading westbound down Columbia Street. The two vehicles struck the pedestrian and another car before coming to a stop. One car had serious damage to the hood.

Investigators checked the drivers involved for signs of impairment. They do not believe that drugs or alcohol were a factor in this collision. Authorities have not yet told the public whether they plan to file any charges.

The pedestrian, a man in his 30s or 40s, was taken to Harborview Medical Center in Seattle with life-threatening injuries. Medics performed CPR at the scene. The hospital has not released information about his current status.

Detectives are still investigating the cause of the accident. They have asked anyone who witnessed the scene to call 206-684-8923.