Crosswalk at 3-Way Intersection Near Mt. Baker Parker Is Dangerous for Pedestrians

I am very familiar with the crosswalk near Mt. Baker park.  I lived just a few blocks from there from 1996 to 2001—the first home I ever bought was on 37th Avenue.  After I married attorney Chris Davis I sold my home in Mt. Baker and we moved to nearby Madrona.  But our son (who is now 8 years old) loves the zipline-style swing that is in Mt. Baker Park—so we are there at least once per week.  In fact, we were just there this past Thursday. 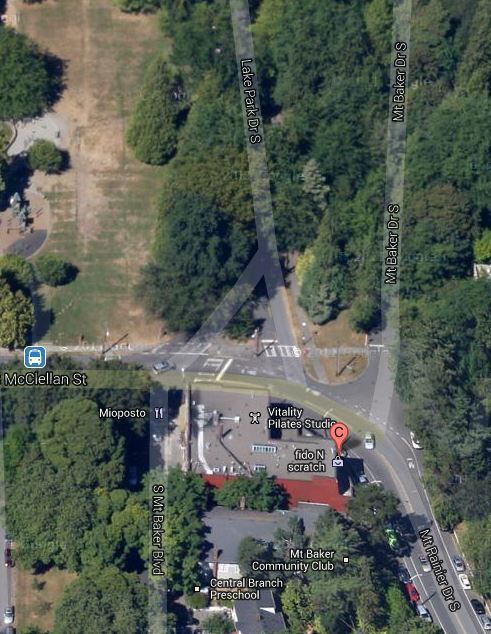 This area can be very, very dangerous for pedestrians.  Mothers and children visiting the park often must park their cars on neighborhood streets or the busy through-street.  There is only one marked crosswalk that crosses McClellan from the intersection near the Mioposto Café to the park.  This crosswalk is located inside the turning radius.  It can be very difficult for fast-moving cars to see people crossing the street.

As a former resident and frequent visitor to the neighborhood, I have always thought that there should be signs that warn motorists to slow down and/or a stoplight at the crosswalk.  There is no walk signal, no flags to increase visibility, nothing.  This multi-street intersection is very, very dangers.

This past Saturday an infant in a stroller and her nanny were struck while crossing the street in that same crosswalk.  Police say that the driver of the vehicle that hit them was cruising down South McClellan at a relatively high rate of speed.

Seattle Police said the car that hit them was cruising down South McClellan Street about 6 p.m. last night.  Fortunately the baby was unharmed and the nanny has only a few minor bruises.  Both of them could easily have been killed.

The driver of the vehicle claims that the sun was in her eyes.  She also claims to have stopped at the stop sign.  But as a frequent visitor and pedestrian in the area I can say that a lot of drivers merely pause or come to a rolling stop.

Everyone who was involved in the incident on Saturday is fortunately that there was a happy ending this time.  The next crosswalk accident victim in Mt. Baker may not be so lucky.

My husband, attorney Chris Davis, wrote a book on Washington State pedestrian accident law.  You can get a copy of Right of Way: The Essential Guide to Pedestrian Accident Law in Washington State here: http://www.injurytriallawyer.com/reports/right-of-way--the-essential-guide-to-pedestrian-accident-law-in-washington-state.cfm.