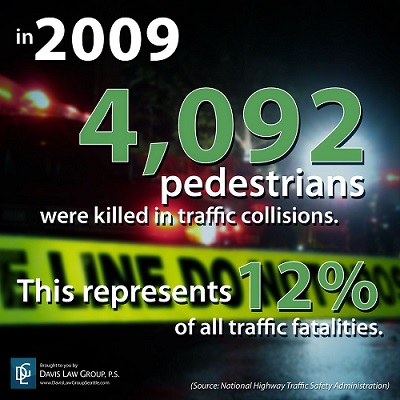 This amounts to 30% of all traffic fatalities involving children are under the age of 15 years. The National Highway Traffic Safety Administration (NHTSA) estimates that more than one-fifth of children between the ages of five and nine who were killed in traffic crashes were pedestrians at the time of the accident.

On a national level, 49% of fatal accidents occur on a Friday, Saturday, or Sunday. The most dangerous days of the year are New Year's Day and Halloween. The total cost of pedestrian death and injury cases involving children is at least $5.2 billion per year.

Studies show that by three years of age, boys outnumber girls in non-fatal pedestrian injuries and in fatal pedestrian accidents by a margin of almost two to one. Many of the injuries to toddlers and preschoolers are considered "non-traffic."

That is, these accidents mostly occur in places like driveways and parking lots instead of public roadways or thoroughfares. Nearly half of all pedestrian accidents involving children between the ages of one and four occur when a vehicle is backing up in the driveway.

The NHTSA estimates that, on average, 292 fatalities and 18,000 injuries occur each year as a result of back-over accidents. For children, this works out to 50 injured or killed per week. Research has shown that children in this age range are simply too young to understand the dangers posed by a moving vehicle.

To combat the rising death toll of children in back-over accidents, Congress recently enacted the Cameron Guibransen Act. The Act was named for a two-year-old who was killed when an SUV inadvertently backed over him because the vehicle's blind spot made it virtually impossible for the driver to see him. The Act directs the United States Department of Transportation to adopt new safety standards for all vehicles to promote development of technology to prevent injury and death to children caused by back-over accidents. The NHTSA has recommended that all vehicles sold in the United States by 2014 have technology (e.g., rear video cameras) to eliminate these deadly accidents.

The risks for school-age children of getting hit by a moving vehicle are different from those for toddlers. Children under the age of 10 years still need supervision when crossing the street. Oftentimes, a school-age child will forget about vehicles traveling in the street and dart out suddenly and without warning. Many pedestrian accidents involving school-age children between the ages of 6 and 11 years old occur in the morning and afternoon, and at times when children are typically at play.