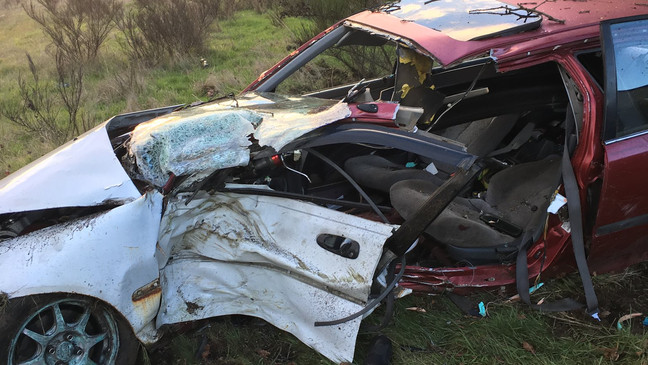 A man has a broken leg after a hit-and-run driver caused a collision on I-5 in Lakewood Monday afternoon.

The 20-year-old victim was injured while traveling south on I-5 near SR-512 Monday afternoon when the driver in front of him reportedly slammed on his brakes suddenly. The victim attempted to change lanes to avoid the braking driver but the driver reportedly also changed lanes, hitting the victim's vehicle and sending him off the roadway.

The alleged at-fault driver then continued south not stopping at the scene or checking on the crashed vehicle.

South I-5, north of Bridgeport in Lakewood. Troopers are on scene of a serious injury, hit and run collision. The driver of this Honda is lucky to be alive. Believe a broken leg is the worst of the injuries. If anyone was witness to this, please contact me.

At this time the at-fault driver has not been identified and authorities are asking for help identifying the silver pickup truck that was involved in this crash.

Hit-run-accidents are especially painful for their victims not only due to the physical, mental, and emotional trauma they can cause but due to the lack of an opportunity to recover and hold the at-fault driver accountable in some cases where the driver is not identified.

As the state trooper said in his tweet, this driver was lucky to escape a crash like this with his life, but will still face an uphill climb to recovery especially if the driver is not eventually identified.

In some cases, at-fault drivers flee due to lack of insurance or other criminality that could still leave accident victims high and dry even after they are identified.

If a driver carrying UIM is struck by another driver who is not insured or even only carries minimal coverage that does not fully cover their costs, UIM coverage would allow an accident victim to make a claim on their own insurance for the additional amount or avoid being left with nothing all together.

Hit-and-Run accidents like this can leave accident victims even more lost and confused than a more typical car accident claim and that's where Davis Law Group can help.

The award-winning team of car accident attorneys at Davis Law Group offer accident victims and their loved ones free case evaluations to help them make sense of the complex claim process and chart out their best path to recovery.

If you or a loved one has been injured in an accident and you have questions about their claim, call 206-727-4000 or use the chat or contact options on this page 24 hours a day. 7days a week to request your complimentary case evaluation.