One Dead After Semi-Truck Rammed Car On I-5 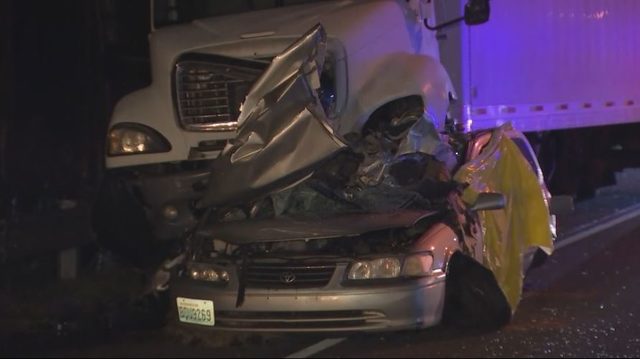 Police were called to the scene of a serious injury crash early Monday morning in Lakewood. A car had stalled in a southbound lane of Interstate 5. A semi-truck slammed into the car, which ended up wedged under the truck.

The driver of the car was killed in the crash. The driver of the semi-truck was not injured. Troopers have not yet released the identity of the driver, but they have said that it was a 27-year-old.

Emergency responders blocked off much of the freeway for four and a half hour while they examined the scene of the crash and cleared debris from the roadway. The semi-truck driver stayed at the scene and cooperated with police. According to the Washington State Patrol, the semi-truck driver did not show any signs of impairment, and they have not yet announced whether they plan to file charges.

(Image: A photograph of the car wedged under the semi-truck taken at the scene of the crash. The driver of the car died at the scene. Image source: KIRO7 News)

Vehicles Involved: One silver car (model not reported) and one white semi-truck.

Injuries: The driver of the stalled car was killed in the crash. The semi-truck driver did not report any injuries.

Investigation Details: Police have not yet released details about why the car stalled in the middle of the roadway. They do not believe that drugs or alcohol were factors in this crash. They are looking into the facts of the accident, and have not yet announced whether charges will be filed.

At Davis Law Group, we’ve spoken to hundreds of victims of crashes involving semi-trucks and other large commercial vehicles. Because semi-trucks are such massive vehicles, crashes involving them frequently cause horrific injuries or death. When insurance claims comes into play, victims of these crashes are often left struggling to navigate a complicated system of legal rights and responsibilities.

These are just a few of the questions that a commercial truck accident lawyer would ask while investigating a case like Monday’s accident.

Was the semi-truck driver able to see the car in the roadway? Ideally, truckers should always be able to see any obstructions in the road ahead of them, especially on a highway with sufficient lighting. Unfortunately, poor visibility caused by bad road design can sometimes make it hard to see a vehicle in the road ahead even if its hazard lights are on.

Was the semi-truck driver distracted by anything inside the cab? Truckers aren’t allowed to play with their phones, watch movies, or use personal computers behind the wheel. Unfortunately, too many do succumb to distraction, especially in the middle of the night when they believe that no one else will be on the roadway. As part of an investigation, a personal injury lawyer might look at phone records and examine other devices that were inside the cab at the time of the crash.

How long had the truck driver been awake, and how long had they been working? Commercial vehicle drivers are required to adhere to federal laws about how long they’re allowed to be on the road while hauling a load. Since truckers are paid by the mile, not by the hour, there’s often a strong incentive for drivers to lie in their logbooks so they can stay on the road for longer. Requirements about time on the road also don’t go into effect while a drive is on their way to pick up a load, or coming back from dropping a load off; this means that some drivers may be on the road for many hours that aren’t recorded in their log books.

As part of an investigation, a personal injury lawyer would carefully examine the trucker’s log book to check how long they were on the road and whether there were any discrepancies. They might also look at other devices on the truck, such as a GPS device, to see if the information on those devices matched the log book. They would also check the driver’s history to see if there were any previous incidents of tampering with log books, working longer than the law allows, falling asleep at the wheel, or making decisions on the road that betray a lack of judgment.

At Davis Law Group, we focus on getting the best possible results for our clients, not on settling quickly. That’s important in any personal injury case, but it’s especially vital in cases involving semi-trucks and other large commercial vehicles. Accident victims have reported seeing investigators from insurance companies arriving at the scene of a crash before police. Insurance companies conduct thorough investigations and defend these cases fiercely, so victims need to have equally committed advocates on their side.

How To Find A Semi-Truck Accident Lawyer

Looking for an experienced legal team that has a proven track record of handling handle a complicated commercial vehicle accident cases? The team at Davis Law Group is ready to help you. You can fill out the contact form on the side of this page, visit our contact page, or call us any time at (206) 727-4000.