On Your Left: June is National Lane Courtesy Month 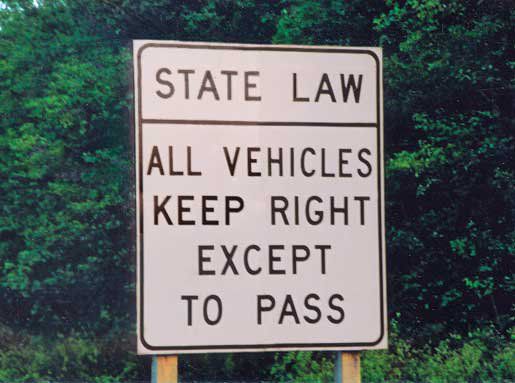 Summer exists as a time largely unchanged by its holidays. Most celebrations fold into the rhythms of the season itself: barbecues, air conditioned movie theaters (which perhaps aren’t needed during the infamous northwestern month of “Juneuary”), hauling boat trailers, or however else you may choose to relax.

Even if you love these eventful but tradition-less days that don’t require gift wrap or centerpieces you should still celebrate the holiday that lasts throughout all of June: Lane Courtesy Month.

A cursory search on Youtube reveals that not many people know what the month is about (the title of the second result: “How to Observe Bowling Lane Courtesy.”) Obviously, we mean traffic lanes when we’re talking about ‘lane courtesy.'

Just so we’re clear here, Lane Courtesy Month was created by the grassroots organization National Motorist Association. There aren’t even many holiday festivities associated with it. So don’t worry about giving your car a box of chocolates.

Speaking generally, Lane Courtesy Month simply nudges all drivers to get out of that left hand lane as a courtesy to others on the road.

Lane courtesy, also known as lane discipline for you Prince of Tides types, is the practice of letting a faster car pass you by using the left lane. Washington is one of the more stern states in the U.S. that goes all out for Lane Courtesy Month, all year long. State law (RCW 46.61.100) explicitly forbids using the left lane for anything but turning or passing.

So even if you’re going the speed limit, you are technically not legally allowed to simply continue ‘surfing’ in that left lane. In fact, Washington State Patrol (WSP) troopers recently launched an awareness campaign to drive home the point that driving in the left lane for an extended period of time is illegal and that violators of the law would be ticketed.

The logic behind the law is simple. Most vehicle accidents occur when a driver accelerates or decelerates, just like most plane crashes occur during takeoff or landing. A slow driver anchoring him or herself in the left lane increases the number of times a faster car has to brake and then speed up. Ultimately, these differences in speed can lead to unnecessary injuries from motor vehicle accidents.

If someone’s lane arrogance injured you while you were driving you might need to consult a qualified personal injury attorney to discover what legal recourse is available to you. You can also visit our library to learn more about what you should do in the event of a motor vehicle accident, including the major mistakes to avoid—valuable information to have before you’re in a collision.