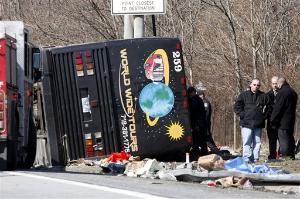 The National Transportation Safety Board (NTSB) announced Tuesday that the deadly tour bus crash that took the lives of 15 Americans in March of 2011 was caused by driver fatigue and, subsequently, the employer that provided little safety oversight for its drivers.

According to reports from the Associated Press, the five-member board decided Tuesday, in a unanimous vote, that bus driver Ophadell Williams had essentially no sleep, other than occasional naps he took while bus passengers were inside a casino, in the three days leading up to the March 2011 accident.

The bus was reportedly headed northbound on Interstate 95 en-route to New York’s Chinatown area at approximately 78 mph in a 50 mph zone. The bus drifted off the roadway and struck a guardrail, rolled over and crashed into a pole. The pole apparently split through the bus and peeled the roof all the way to the rear tires, according to reports.

Details of the Investigation

Investigators determined that Williams made no attempt to brake or steer the bus back onto the interstate, which further suggested that he was suffering from severe fatigue. According to court documents, he has been formally charged with manslaughter and criminally negligent homicide in New York, charges which he has pleaded not guilty to.

Williams’ shifts were predominantly overnight, which required him to sleep during the day. However, he would allegedly switch his sleep schedule to night time on his days off, something that typically causes a natural reaction in the body similar to jetlag. In the three days leading up to the accident, investigators determined that Williams’ cell phone and rental car were in continuous use during times he was supposedly sleeping.

Since the accident, the NTSB shutdown Williams’ employer, World Wide Tours of Greater New York, during a string of crackdowns on the motor coach industry. A number of other bus tour companies were shut down in those crackdowns for a range of violations similar to those of World Wide Tours.

The motor coach industry is responsible for the transportation of 700 million passengers each year in the United States. That number is roughly the same as the domestic airline industry, making safety policies and protocol in the industry even more important. If you have been injured in a tour bus accident, you may be entitled to financial compensation for your injuries and lost wages.