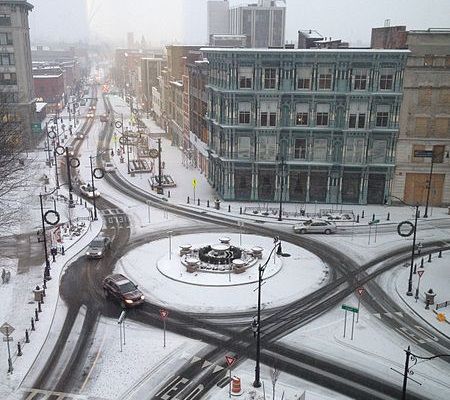 Measuring the efficiency of new traffic safety measures seems like a no-brainer. If fewer crashes happen on a revamped road, that means it’s safer, right?

That’s not quite true. A stretch of road that sees dozens of fender-benders each year isn’t as dangerous as one with two or three deaths during the same time period. As engineers and city planners work to improve the safety of roads, they’re spending less time focusing on eliminated all car accidents and more time on coming up with strategies to reduce the deadliest crashes.

A T-bone crash, also known as a side collision or broadside collision, happens when one vehicle slams into the side of another. Modern cars and trucks have many safety features that protect drivers when they’re struck from the front and the rear, including “crumple zones” that will absorb most of the force of an oncoming vehicle by folding inwards. A vehicle’s doors need to be lightweight, partially made of glass, and close to where the driver or passenger is sitting; there isn’t much space for a door to crumple in a crash without hitting a person.

T-bone collisions happen most often at intersections, where two streets come together at a right angle. Drivers who try to beat the red light, or try to make a left turn through the intersection without checking that the path is clear, are at risk of slamming into someone who has the right of way. European and Latin American cities have replaced many of their most dangerous intersections with roundabouts, and American cities are beginning to build more roundabouts in high-fatality areas. A 2001 study found that crashes involving injuries were reduced 80 percent by the installation of a roundabout. The way that traffic flows in a roundabout forces vehicles to go slower and follow the flow of traffic instead of crossing it, reducing the number of T-bone crashes.

Driverless cars get into more accidents, but do they protect their passengers?

The University of Michigan’s Transportation Research Institute just released a study stating that Autonomous Vehicles got into more crashes overall, but more of those crashes were low speed. Although passengers reported more injuries in Autonomous Vehicles (0.36 injuries per crash, compared with 0.25 for conventional vehicles), those crashes were at lower speeds and the injuries were less severe. They were particularly good at avoiding head-on and T-bone crashes, the most dangerous potential crashes, and they didn’t hit any pedestrians or bicyclists over the course of the study. Unlike human drivers, self-driving cards didn’t cause any of the accidents they were involved in.

Self-driving cars record a tremendous amount of data about motor vehicle accidents, including video, the speed of the car, and the force with which brakes were applied. The nonprofit consumer advocacy agency Consumer Watchdog hypothesized that the increased number of accidents with self-driving cars might be partially the result of these cars reacting to road hazards by stopping short faster than a human could, leading to behavior that other drivers on the road couldn’t predict.