Washington State Patrol's Breathalyzer a few weeks from retirement, but are the new models secure?

The Seattle Times's Jennifer Sullivan has a story of the the Washington State Patrol replacing its two decades old breathalyzer with the latest and greatest model. 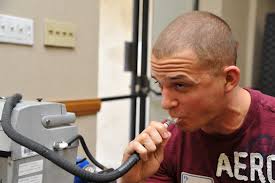 How exactly are these two models different?

Thankfully the field of on-site chemical analysis of a person's breath has advanced since the 1984 when the current model for breath test machines were purchased. The article indicates that the main differences between the 1984 and now are:
-Size (current models are more compact)
-Display (the current models offer a fetching, app-like display of any prior impaired driving offenses the suspect may have)
-Speed (computing power has sped up thanks to Moore's Law)
-Name (the old model is called the 'DataMaster' which is very 80s, and the new model is the 'Alcotest,' which is equally dorky)

Where did the Breathalyzer originate?

In the late 1920s a scientist surprised himself by discovering that it was easier to measure alcohol when it was in gaseous form rather than liquid form (that liquid being urine). This realization eventually created the first breathalyzer, which cycled a motorist's breath through a chemical solution that changed color depending on how drunk the motorist was.

It wasn't until the late 1960s that an electronic breathalyzer became available for police (in Britain). It still depended on color-changing liquid. Eventually that british technology concern became an American corporation.

Are the current models more 1984 than the 1984 model breathalyzers?

One of the features that the Washington State Police are not using is a live internet connection that would transmit breathalyzing results from the field because there are no security protocols in place.

This means that breath-test data could be susceptible to hacking and Orwellian manipulation. Legally this outcome could mean a variety of things for prosecuting the careless drivers that get behind the wheel while drunk and cause a car accident that injures another person. The last thing we want is for the technology that is supposed to protect us from drunk drivers to let them off the hook.