Two serious crashes snarled traffic and sent people to the hospital in the Pacific Northwest. Both involved semi-trucks. As we often see here at Davis Law Group, crashes involving large commercial trucks are extremely dangerous. Semi-trucks can weigh tens of thousands of pounds; they cannot come to a stop quickly, and the drivers often have large blind spots. On top of that, the trucking industry is lobbying for decreasing regulations, and truck drivers are often pushed to drive for too long on too little sleep or while under the influence of drugs. 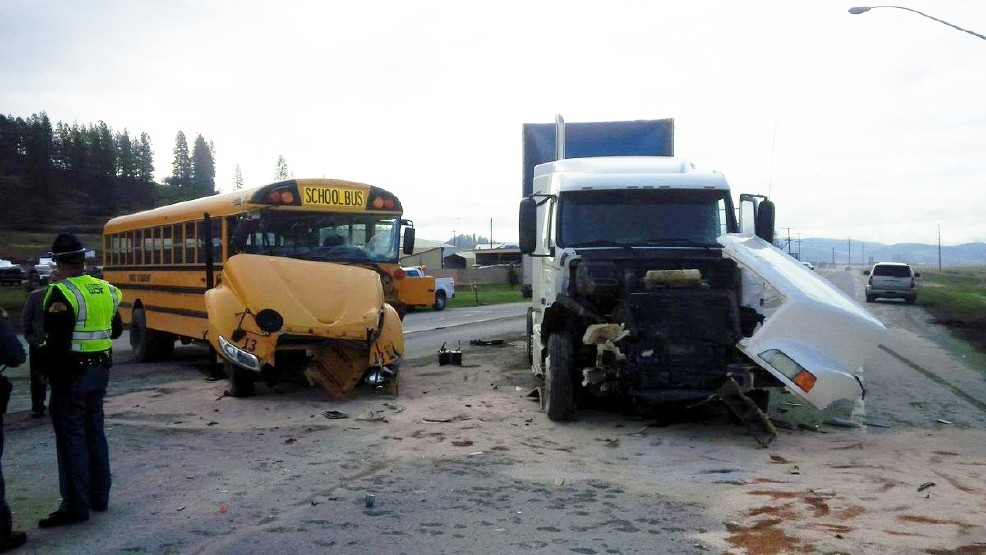 Photograph of the two vehicles involved in the crash at the scene of the accident. Image source: KOMO News

Multiple people were hurt in a trucking crash involving a semi and a school bus near Colville, Washington. 25 students were on board the bus at the time. The driver of the school bus sustained serious injuries. One student was taken to the hospital with minor injuries after the collision, and multiple students were treated at the scene but not hospitalized. The driver of the truck was reported to be “OK” with no information about injuries.

The crash happened two miles north of Colville on Highway 395 and Williams Lake Road. Washington State Patrol troopers blocked the roadway in both directions and advised the Washington State Department of Transit for assistance with traffic control.

Troopers have not yet released details about the cause of the accident. It is unclear at this time whether the driver of the semi-truck was under the influence of drugs or alcohol or whether lack of sleep or inattentiveness could be a factor. A photograph taken at the scene shows damage to the front ends of both the school bus and the semi-truck, suggesting that this may have been a head-on collision.

The Scottsburg Bridge on Oregon Highway 38 is closed after a semi-truck crashed on Wednesday afternoon. The truck was hauling empty pallets when it crashed through a railing. Police said that the 26-year-old driver, a Seattle resident, was trapped and had to be extracted by rescuers.

The driver suffered minor injuries and was transported to a hospital. The trailer plunged into the Umpqua River. The pallets it was carrying floated downstream. Diesel fuel, a toxic pollutant, leaked into the water.

According to police officers, the crash was caused by excessive speed. They have issued citations for several traffic violations. No other injuries were reported in the crash.