2 Killed, 6 Injured in Motorhome Crash on I-90 Near Ellensburg 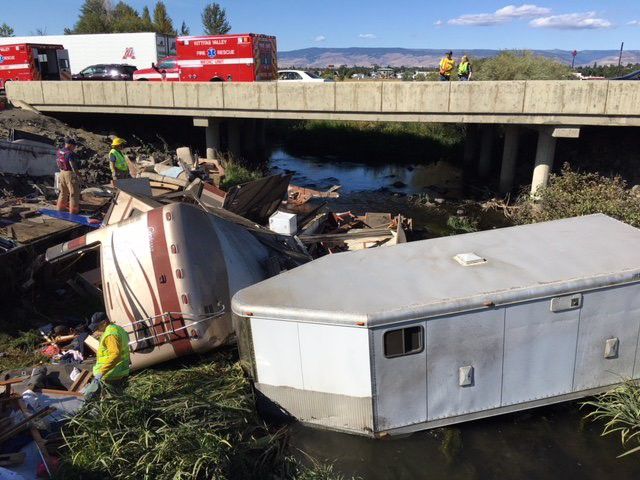 Two people were killed and six others were critically hurt in a motorhome crash on Interstate 90 near Ellensburg on Monday, according to the Washington State Patrol.

The incident occurred around 3:30 p.m. on westbound I-90. The 40-foot motorhome and trailer suffered a blown tire and the driver lost control. The motorhome went off the road and into a median, down an embankment, coming to rest in a creek.

A 61-year-old Snohomish man and a 6-year-old girl were killed. Six other passengers were airlifted to either Harborview Medical Center in Seattle, Kittitas Valley Hospital in Ellensburg, or Virginia Mason Hospital in Yakima.

The roadway was mostly blocked for the investigation. All lanes reopened around 8:30 p.m.

Blown Tires on RVs Cause Accidents

A quick Google search shows just how prevalent blown tire accidents on recreational vehicles are, particularly one brand of tire.

Some older Goodyear motorhome tires, the G159 tires manufactured between 1996 and 2003, have led to at least 40 legal cases over the past 10 years. Further, the National Highway Traffic Safety Administration has begun looking into whether roughly 40,000 Goodyear motorhome tires still in use may fail and cause potentially deadly crashes.

A lawsuit filed by an Arizona family claims that the Goodyear tires caused a devastating crash in 2003. It goes on to state that there were at least 98 death or injury claims and well in excess of 600 property damage claims caused by the G159 failures.

So obviously defective tires are one cause of tire blowouts on RVs. Other causes also include:

The Statute of Limitations for personal injury claims in Washington state is three years from the date of the accident, meaning that claims must be filed before that time runs out. But important information and evidence can be lost or jeopardized almost immediately after an accident.

It’s important that you and your family contact a law firm with the resources to begin researching your case and advocating for you ASAP, while you focus on recovering from the accident.

For a free case evaluation with the RV accident attorneys at Davis Law Group, P.S., call (206) 727-4000, use the chat feature below or fill out the form on this page to get started.