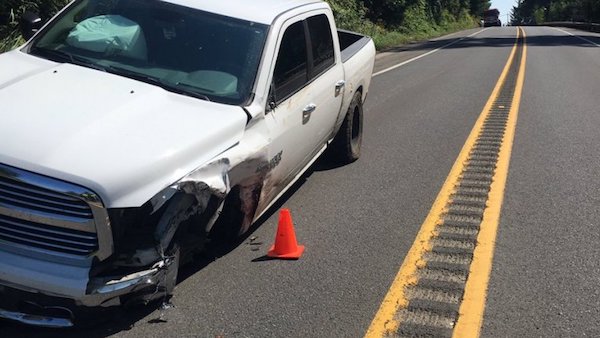 Two people on a motorcycle were killed Saturday when a pickup truck hit them head-on on State Route 4 in Cathlamet, according to the Washington State Patrol.

State Patrol said a Dodge Ram pickup truck driven by a 22-year-old Longview man crossed the center line around 1 p.m. and hit two motorcycles west of Cathlamet. The 56-year-old male driver and 54-year-old female passenger, both from Vancouver, on the first motorcycle both died.

The 56-year-old male driver and 56-year-old female passenger, both from Sequim, on the second motorcycle were seriously injured. Both were airlifted to PeaceHealth Southwest Medical Center in Vancouver.

Impairment was not believed to be a factor in the collision. All four motorcycle riders were wearing helmets and both drivers had valid motorcycle endorsements.

This motorcycle accident is still under investigation. The driver faces charges of negligent driving in the second degree.

SR 4 was blocked for several hours as police collected evidence and used a drone to map the scene.