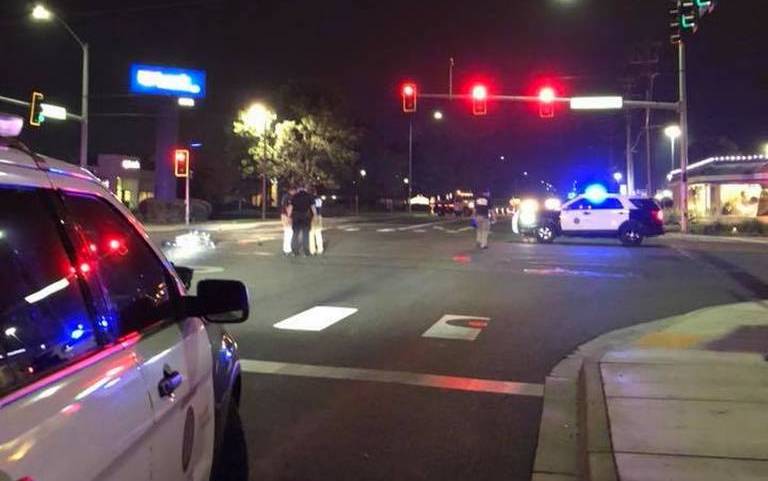 A motorcyclist was struck and killed Tuesday night in Kennewick, according to the Kennewick Police Department.

The incident occurred at 8:47 p.m. at the intersection of Clearwater Avenue and Edison Street.

The driver of the Tundra fled the scene, but was located by witnesses in the parking lot of Albertsons Grocery. She was booked into Benton County jail for investigation for vehicular homicide and felony hit-and-run for her role in the crash.

Police believe that alcohol and/or drugs were a contributing factor with the driver of the Tundra.

The incident is now under investigation by the Kennewick Police Traffic Unit.

The law states that a driver making a left-hand turn has the right-of-way only if they are proceeding on a left-turn green arrow. Otherwise, the turning driver must yield to oncoming traffic.

Left-turn drivers must also watch for pedestrians and cyclists to cross through the crosswalk or street.

It is extremely difficult for a left-turn driver to prove they were not at fault or only partially at fault after an accident. There are some common exceptions:

Washington state is a pure comparative fault state. Any person at fault in an accident that causes damage to another is responsible for that damage. But if the person claiming damages shared in the fault, their damage recovery in a lawsuit will be reduced in proportion to his or her fault.

If you or a loved one has suffered an injury in a left-turn accident, or any type of motorcycle collision, you’re not alone. Motorcycle enthusiasts throughout the country frequently encounter vehicles that simply don’t pay attention and turn right in front of you.

If you have that kind of injury, you may have a valid claim. For a free case evaluation with an experienced motorcycle accident lawyer in Washington state, contact Davis Law Group, P.S., today. Call (206) 727-4000 or use the confidential online form on this page to contact our office.